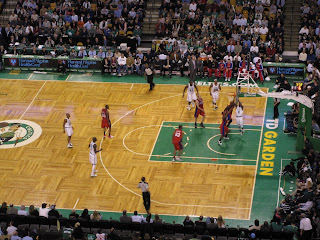 A friend and I made the Celtics game tonight--tickets for games against the Clippers aren't exactly tough to find--and I would say based on simple observation that the Celtics franchise is setting itself up well for the future...off the court, at least.

On the court, I have no idea. I like the Celtics, but I don't watch much basketball other than Celtics games. (OK, the only basketball I watch is Celtics games.) I do know that with Kevin Garnett, Ray Allen and Paul Pierce--my favorite Celtic and maybe my favorite Boston athlete of all time--all aging, the Celts need to win another title soon if they want to hang an 18th banner in the new Garden.

But what they have going for them off the court could be very powerful for years to come. From what I could tell tonight, the average age among Celtics fans is about 19. I don't think I'm exaggerating here. Sure, there were plenty of typical, 30- and 40-something male sports fans there tonight. But there were also loads of teenage and 20-something fans, and absolutely scads of kids.

Now, granted, the two games I've seen this season have been against weak opponents (Golden State and the Clips), meaning more tickets than usual were probably available for school groups, church organizations and the like. Still, most of the teens and kids I saw tonight seemed to be with their parents--and the parents hadn't dragged them to the game. If anything, it was the other way around.

The Bruins get plenty of kids at their games, too, but Bruins games tend to have an older, rougher, more intense feel overall. Maybe that's just the nature of hockey in comparison to basketball. Honestly, the typical Bruins crowd creates a little better sports atmosphere--it's a bit more serious and edgy than the atmosphere that Celtics games offer.

Celtics games are fun, but they're fun in a big-party sort of way, not really in a pro-sporting-event sense. They're a tad silly, from the goofy dancers in the crowd caught on the Jumbotron right down to the game presentation itself, which really emphasizes dancers, upbeat music and wacky side shows. The Celtics crowd is plenty passionate, though, and very involved in the game. The new Garden can get loud for both winter-sports franchises. Other than at Fenway, where the goal for many now is to see and be seen, Boston generally has good sports fans who go to games to see the games and not just to hang around and socialize.

In any case, both the Bruins and the Celtics offer great ways to pass winter days and evenings if the tickets to their games are cheap enough (as they were tonight). It's clear, though, that while the Bruins' fan base seems to trend toward older supporters, the Celtics have a strong hold on the future of Boston sports fans. Of course, success might have a lot to do with that. If the Bruins could finally win another Stanley Cup (no, I'm not holding my breath) to match the Celts' 2008 championship, the kids in Boston might just get into pro hockey for a while. If only...

As it turns out, we were lucky that tonight's game took place at all. Warm, wet weather--probably 60 degrees at game time--led to lots of condensation on the floor at the new Garden and very likely to some of the Bruins' ice melting and seeping onto the Celts' parquet. (Is there anything the Bruins can't screw up right now?) We noticed tonight that the mop team was going at it with exceptional vigor, even mopping one end of the court while play was taking place at the other. 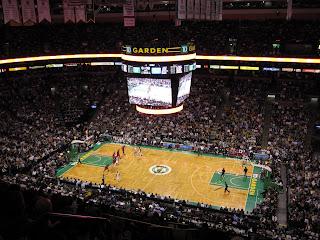 Tony Allen nearly took out a mop boy during a breakaway. Sure enough, I just read tonight that the two coaches nearly canceled the game in the first quarter. Fortunately, everyone survived (including KG with his wonky knee--he actually played very well), and the show went on. That's good because if the Celtics hadn't played out their contest tonight, we would have had a whole bunch of cranky kids on our hands at the new Garden. In the end, though, the kids were alright. And the Celtics won, 95-89.

As always, my completely unedited, unvarnished and untouched photo set from tonight is at your disposal. I'm probably done with Boston pro sporting events for the winter season. This Friday, though, it's Providence at BC for more college hockey (and even more youth).
Posted by Lee Pender at 12:43 AM

Email ThisBlogThis!Share to TwitterShare to FacebookShare to Pinterest
Labels: basketball, hockey, leisure, nba, nhl, photography, sports, stanley cup, this could be the start of something big, youth is wasted on the young