All in all, a fine night tonight. My lovely wife found online yesterday a package deal offering a buffet (with open bar...ahem) and Celtics tickets. So, my friend, George, and I began our evening tonight at the Greatest Bar, the name of which carries more than a little hyperbole, although the place wasn't too bad, everything considered.

After a few beers and some meatballs, wings and pasta (fine pregame fare, actually), we strolled across Causeway Street to the...uh, what's it called now? TD Fleet Center? Fleet Banknorth Garden? Shawmut Fleet TD? Anyway, we went to the New Garden (now the TD Garden, I think), the place where the Celtics (and Bruins) play.

The Celts didn't play especially well, but it was a treat for me to see Ray Allen, KG, Paul Pierce (my personal favorite), Rajon Rondo and company play live. I'd never been to a Celtics game in Boston; the last time I saw the Celts play, they were in Reunion Arena circa 1996 and their "best player" was probably Never Nervous Pervis Ellison. The game vs. the Mavericks wasn't exactly riveting.

But tonight's game was entertaining--Boston played sloppily enough to let an undermanned Golden State team hang around in the first half, but the Celtics turned on the afterburners in the third quarter and pulled away with some big threes from Rondo and Eddie House and a few nice plays from Allen and a somewhat hobbling Pierce.

Final score: Celtics 109, Warriors 95 (an old-fashioned, high-scoring NBA game--how about that?); three beers; a gin & tonic (hey, I took the train into town); approximately four plates of buffet food; a surprisingly inexpensive Celtics cap from the Pro Shop in North Station, which is actually called the Boston Bruins Pro Shop; and one Big Gulp of caffeine-free Diet Coke at the 7-Eleven across from the Garden. Other than the Warriors, there were no losers!

We had balcony seats, which weren't actually too bad. I managed to snap a few shots. Enjoy. The entire (completely unedited, as always) collection is here. 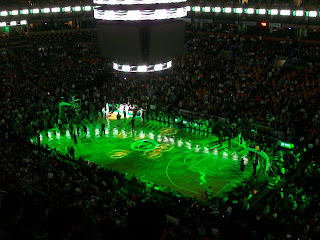 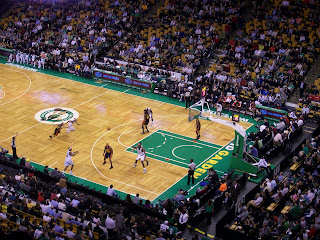 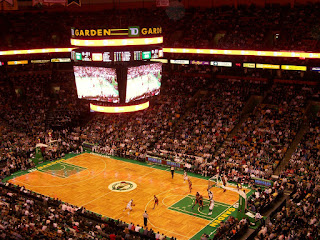 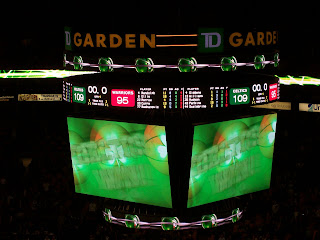