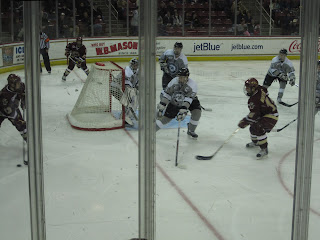 Don't get me wrong. I love TCU. I'm a permanent (albeit reformed) Horned Frog fan and a lover of Horned Frog football in particular. I have no regrets about where I chose to go to school.

But nothing's perfect, and that notion applies to TCU just as much as it does to anyplace else. Even when the football team was bad--really lousy--I loved TCU football game days. There was always a buzz on campus, even if it did largely emanate from opposing fans on many occasions. (Things have certainly changed since then...for the better. Much better.)

In my last two years at TCU, when the team was occasionally half-decent, the buzz was much more palpable and sometimes even downright exciting. OK, so ESPN never sent the College Game Day crew to cover a TCU team struggling to become bowl-eligible or just trying to avoid a losing record. (Then again, I'm not sure that College Game Day existed in the mid-'90s. If it did, I rarely woke up on Saturday mornings in time to see it.) Still, TCU game days were almost always a lot of fun.

But the end of football season--even a 2-8-1 season like the one we had in 1992--was always a letdown. The weather cooled (or so I thought--the temperature outside is in the single digits as I type now), and the campus kind of sank into a wintertime funk--and not the good kind of funk. The kind of dull, repetitive funk that involved a sport that mostly depresses me: college basketball.

OK, I like the Celtics. But other than that, basketball doesn't do much for me as a sport. And college basketball in particular is a real downer. For me, it has always epitomized the beginning of the long football off-season and the toughest part of the slog through a winter of discontent (is there any other kind?). I went to a few TCU basketball games in my time in school...but not many. It just...well, it just wasn't football.

Sure, I might have liked basketball better if I'd gone to Duke or some other basketball school with insufferable fans, but I didn't. And I'm a Texan, so I'm all about football. Well, almost. I also like baseball well enough and really love soccer, rugby...and hockey. Especially hockey. I think that hockey would be my favorite sport now if I'd grown up in some cold-weather city with a real hockey culture and had learned to skate when I was two. But I didn't...and I digress.

College hockey at BC has filled my craving for winter sports, especially live winter sports. (In fact, it helps me get through winter, period.) It's a lot like college basketball, I suppose--it's (usually) an indoor sport, and it doesn't really crank up in a serious way until after football season ends. But, for some reason, college hockey games are just a lot more fun than college basketball games. Hockey is a far superior sport in comparison to basketball, to be sure, but college hockey in particular is wonderfully hype-free and simple.

When I see college basketball highlights (I don't watch the games live), I look at all the copycat hipster-kid fans from all over the country and get the feeling that they're at the games because they feel as though they're supposed to be. Some of them probably love basketball (my brother-in-law, the Kansas alumnus, really does), but most of them seem more interested in looking like dorks and trying to attract the ESPN2 cameras than they are in watching the game.

I don't get that feeling at college hockey games at all. The fans at BC games--the students in particular--at least seem to be there because they really love hockey. They can get loud and create a great atmosphere, but they're also really into the game. They get it, and they love it. And they're only minimally obnoxious, which is really nice for me now that I'm in my mid-30s and don't have the patience for group silliness that I once had.

College hockey is almost never broadcast on national TV, so it doesn't suffer from over-hyping by ESPN or some legion of loud-keyboard bloggers. It's a regional sport--mainly in the Northeast and Midwest, although it stretches out to Alaska and down as far as Alabama--and it's kind of an intimate sport, if that makes sense. Tonight, the weather outside was bitter cold--probably about 10 degrees (and windy!) at game time. But inside the arena, there was a certain genuine warmth that I don't feel at plastic, overproduced college basketball games.

There was passion for BC, sure (although not much for poor Providence, which mostly failed to show up on both the ice and in the seats), but there was also passion for the game itself. And it was real passion, not some false emotion stoked by TV talking heads and half-tanked frat boys with painted faces. There's no way I could ever quantify this, but my guess is that the typical college hockey student crowd has a higher average GPA than the typical college basketball student throng has. (There must be, of course, individual exceptions, such as my very smart brother-in-law, who almost assuredly had a stellar GPA at KU and probably went to a lot of basketball games.)

Hockey may be a rough, sometimes brutal sport, but, at least at the college level and among college students, it seems to draw the thinking fan who wants to both have fun and really appreciate the game itself at the same time. And they do that. And so do the rest of us. I have said for years--barely even jokingly--that TCU should just scrap basketball altogether (not many people would miss it...), flood Daniel-Meyer Coliseum, freeze the water and "field" men's and women's hockey teams.

I didn't have that when I was in college (and TCU will likely never have hockey, of course)--but if I had, I would have spent a lot more winter nights over in Daniel-Meyer. I have college hockey now, though, and I'm glad I do. College hockey is a fantastic cure for the post-football winter blues. It's always a great night out with friends--usually with my good friend, Steven, who has become a real hockey fan over the last couple of years; and with my work buddy, Scott, and his family. That was the group tonight. Good times.

Oh, and it doesn't hurt that BC's usually pretty good. The Eagles won tonight, 5-2. (It was 5-1 after the first period...) As always, my unedited, untouched photo set is online for your examination and comments. A few samples follow. Go Eagles! 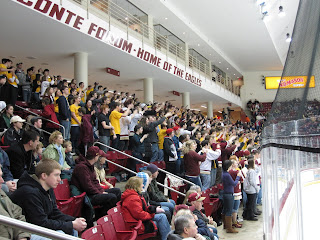 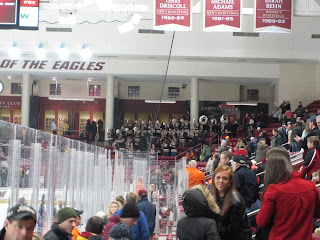 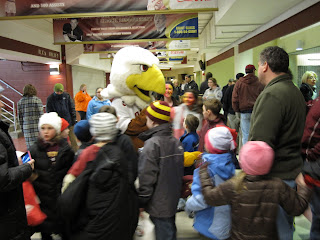