Close Encounters with the Penalty Box

OK, so, despite my complaints about ticket prices (and despite how lousy the team has been this season), I broke down and went to a Bruins game today. Well, I didn't really break down. My lovely wife threw a baby shower at our apartment for her little sister today, and I, uh, didn't want to be there...although I'm sure it was lovely.

So, Friday night, I troweled around the Bruins ticket exchange on Ticketmaster and found a single balcony ticket for $15--or $19.95 with Ticketmaster's mystery fees (I printed the ticket myself, so there was no delivery charge) tacked on. I figured that was a pretty good deal. I also figured that taking in a B's game--they are my favorite Boston sports franchise, after all--would be a great way to pass a winter Saturday. 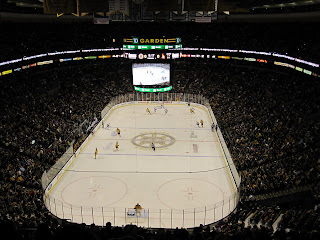 I went to the game and mostly enjoyed myself despite the Bruins dropping a rather dull 2-1 decision to Ottawa. (I've been on the brink of a full-scale Bruins rant since I started this blog, but I'm not ready to unleash it yet. It's still building. Beware. Seriously, beware.) Anyway, there's something about the communal nature of sporting events that I really enjoy, win or lose--although winning is always better.

Being around a bunch of people who share an interest with me--even if I don't talk to them at all, which I didn't today--is comforting somehow. I feel like part of something that's greater than I am, which is clearly the case when I'm at a game. That feeling of community seems to fulfill a basic human need, and I also feel very Bostonian when I go to B's games. I sport a vintage late-'80s black B's jersey over a BC sweatshirt and a t-shirt for a three-layer, no-coat, hockey-game look.

I look like part of the crowd, even though I'm not, really. I didn't grow up in Greater Boston, didn't start learning to skate until last year (at age 35) and don't work as a contractor in Woburn or for a unionized construction firm. I don't have kids in youth hockey (although that will hopefully happen someday), and, although I've been a B's fan since 1993, I don't make that many games compared to most folks who do go. It's surprising how many people at the games know each other. It's like a big fraternity, and I'm like the quiet, nerdy guy who's trying to just fit in and look cool without actually causing anybody to notice me.

Think about the Paul character from the last few seasons of Cheers--I'm Paul, except without a Norm there to constantly try to get me involved in things and make me part of the group in earnest. I do cheer like mad when the Bruins score, though, and I do follow the game closely and pretty vocally. I've developed a nice little working knowledge of hockey over the past couple of decades. And I've developed a pathetic, entirely unrequited love for the Bruins.

Regardless, the colors of Bruins games are great--with the black and gold everywhere--and the atmosphere is usually very good, sometimes electric. Hockey just lends itself more to moments of spontaneous excitement (goals, fights, great saves) more than most other sports do. (I feel the same way about soccer, actually, but I digress.) Plus, the Bruins' game presentation is frankly first rate and is almost entertaining enough in itself to make fans forget how bad "their" Boston Bruins usually are.

Anyway, my real adventure began after the game when I realized that the 4:30 train from North Station to Waltham I had expected to take home didn't exist and that the next train wouldn't run until 5:30. In order to kill some time, I dropped into--actually, waited in a really long line to get into--the tiny Bruins Pro Shop in North Station. While I was there, I heard people speaking in hushed tones about LB, and some woman was busy confirming LB's e-mail address. LB, of course (in case you live in Boston), is Lyndon Byers, former Bruin and current radio personality on one of Boston's rock stations, WAAF.

LB played on two Bruins teams that reached the Stanley Cup finals--the last two, from 1987-88 and 1989-90--but he wasn't exactly known for his fleet skating or skilled puck handling. In fact, LB was known much more for beating the living tar out of people (and sometimes taking a bit of a licking himself). Nevertheless, he is a former Bruin, and when I saw him towering over the crowd in the extremely packed, intensely hot Pro Shop, I figured I had to meet him.

I think he was just there as a fan, not really making a public appearance per se (he was buying stuff), so I didn't want to hound him too much. As I was making my way toward LB, I head some guy walk up to him and say, "We could have used you out there today." (True--the B's were listless and could have used some, uh, physicality.)

I made my way over to LB not knowing exactly what to say but knowing that I wanted to meet him. I was by myself with no kids in tow or anything like that--I didn't want a photo or an autograph; I just wanted to shake his hand. So, I walked up to him and said, "Hey, LB, I just wanted to shake your hand." (Nice intro.) He looked at me...let's say curiously (sometimes I forget that I look like this now, and I'll have more on this picture later)... 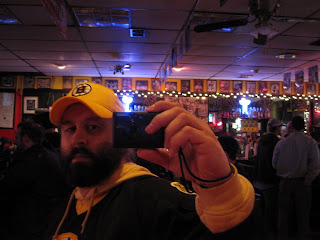 and said, "Hey, what's up, dude?" His massive hand enveloped mine. The guy is not small. Now, I have a tendency to freeze in front of celebrities, even minor ones, and this was no exception. Not sure exactly why I wanted to meet this guy or what I was going to say, I looked at him and said...you guessed it..."We could have used you out there today." Yes...I said exactly the same thing some other guy had said to him maybe 45 seconds before. Smooth. Can you tell I work with words for a living?

Anyway, he was polite and friendly and said something about how he wouldn't be able to play in the league today and how players skate faster now than they did in his day. I think I said something like, "Nice to meet you" and maybe "cheers" (a bad habit I picked up from hanging around too many English guys in Europe) and walked away only somewhat mortified. Everything considered, it could have gone worse. And I met LB! At random, and not at some staged event! I think that counts as a brush with greatness. Maybe.

The Pro Shop didn't occupy me for that long; I still had about an hour to kill before my 5:30 train. So, I walked outside North Station and took a few pictures. Then, I came upon this place: 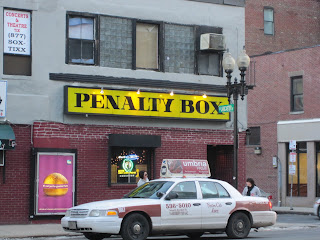 The Penalty Box! Now, I still haven't lived in Boston long enough to know all of the famous local institutions, so maybe anybody and everybody has been to this place and knows all about it. But I had never seen it before, and I figured that I couldn't meet LB after a Bruins game and not go to a bar called the Penalty Box while waiting on my train. So, in I went--the photo of me from above is a self-portrait I took in a mirror at the bar; almost the whole bar is reflected behind me.

I was kind of hoping for a blue-collar, townie crowd, and the place definitely had that feel to it, with fading photos of Boston athletes all over the walls and a beer selection that wasn't even worthy of that of a state-school frat house. Unfortunately, the crowd tipped just toward mildly trendy rather than blue-collar (although not by much--there were plenty of 50-something contractors in there rehashing the disaster that was the game), but I enjoyed the place, anyway. I put away a couple of Bud Lights--served to me by something of a stumpy woman in a Bruins jersey--and enjoyed watching the East-West Shrine Game (one of those lame college football all-star games) on old-school TVs.

I manged to snap a couple of pictures inside the bar. They're a tad blurry (and I think my finger's in one of them), but they hopefully provide some idea of the atmosphere. 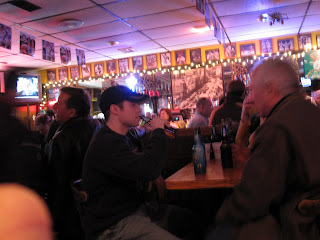 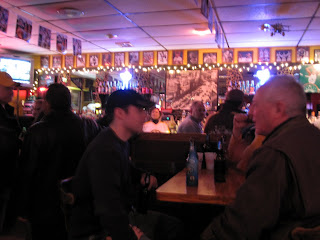 I even snagged a little video, just to give the (nearly) full sensory experience:

I liked this place because it was a pure bar, from what I could tell (no food or anything like that) and because the music was good and the people were having a good time. It wasn't a depressing hole, as I had kind of feared it might be. It was, actually, a pretty darn good place for a cheap drink.

There are a couple of ways to approach sports. Well, there might be more, but I can only think of two right now. One way is to treat it as life or death, to let a loss or a bad run by your team simply ruin your life for a while and to only really enjoy the games when your team is winning--which, let's face it, probably doesn't happen that often and certainly won't last forever.

The second is to enjoy not just the game but everything that goes with it--to appreciate the atmosphere and the skills on display even when your team loses (although second part's not always easy to appreciate) and to cling to the entire experience--the anticipation of filing into the stadium, the electricity of the crowd before the game starts, the color and the pageantry (to steal a phrase from college football), the communal atmosphere, and the post-game drinks and celebration or commiseration...whichever turns out to be appropriate. I do believe that was all once sentence.

I have embraced the second approach, so, despite another fairly pathetic Bruins loss, I count today as a fun day. Not perfect--a win would have put it close to being in that category--but fun nonetheless. Besides, what's more Bostonian than meeting Lyndon Byers and then swilling cheap beer in a bar called the Penalty Box? Maybe I'm not such a poser around here after all. Monday night, Clippers-Celtics at the Garden and another chance to feel Bostonian, albeit with a very different crowd.

Meanwhile, although I don't see it coming this year, the B's need to get to work on hanging another one of these. Just one in my lifetime (which hasn't happened yet...) is all I really ask. 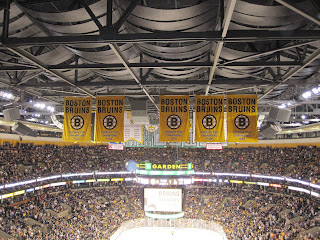