The "Colour" and the Pageantry 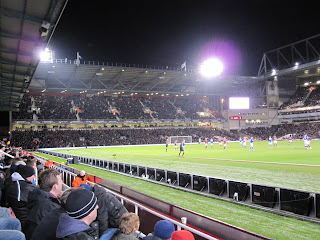 The excitement I've experienced over the last few days has left me reeling--but in the best possible way. All I did was go to a run-of-the-mill, mid-season English Premiership football match (although it was somewhat unusual being a night game and all), and yet I feel as though I've undergone some sort of transformation.

I love sports, as anybody who knows me or reads this blog knows. And although my live-sports resume is surprisingly weak--I've only been to one NFL game, and that was in 1982--I've had the good fortune to attend a pretty wide range of live sporting events, from a Formula 1 Grand Prix to rugby test matches in Europe to countless college and high school (American) football games in Texas. But I really believe, despite the fantastic memories I have of other events and my love for those other sports, that Wednesday night's West Ham v Birmingham football match in East London was the greatest live-sports experience I've ever had.

I'm still trying to get my head around it, but I think what I liked best about the match (other than the score) was that the atmosphere was purely organic--and yet it was completely electric. There is very little production value to European sporting events; most of the excitement comes from the passion and the singing of the supporters themselves, not from marching bands or overbearing public-address announcers or cheerleaders.

Football is probably the best example of this phenomenon. I had been to matches in France and Germany and really enjoyed them, but seeing a team I really love (West Ham, of course) and being able to sing in my native language (more or less) with 34,000 other supporters was almost emotionally overwhelming. The back-and-forth singing--not terribly friendly, I must say--with the traveling Birmingham supporters, who were sat very near us, was both hilarious and energizing. And when our lads shut them up with two goals and we started belting out, "You're not singing anymore..." the feeling of satisfaction was tremendous.

What impressed me the most about West Ham was that I felt as though I fit into the crowd immediately. Folks didn't seem to care that I wasn't an East London native or that I was (even worse) a "Yank." Now, granted, my buddy and I didn't mix with the more surly class of West Ham supporters, who might not have been so thrilled with a football tourist invading their ground--although I'd like to think that they would have at least respected my knowledge of the club and the game, if I had gotten a chance to demonstrate it.

But the people we did mix with--stewards, folks in the club shop and just run-of-the-mill supporters--were universally welcoming and friendly. And they weren't welcoming in some formal way--they brought us in as though we were close friends or would be shortly. Just wearing the claret and blue and having a passion for West Ham gave us a tie with them that was immediate and unbreakable. (Of course, my buddy is a long-time veteran of the Boleyn Ground, which didn't hurt my cause. But his Americanized accent set him apart almost as much as my modified Texas accent marked me out as a visitor.)

Still, people all over--at the ground, at the little food shops around the ground, in the neighborhood--seemed to just take us right in. There's something about being West Ham that's not like being Chelsea or Manchester United or Liverpool. West Ham supporters commit themselves to a special kind of misery--the club has never won the top division of the English league in well more than 100 years of trying. But they also commit themselves to a passion for beautiful football, a lifetime of undying and massively vocal support, and a pride in colors and community that I'd like to think that most clubs just can't match. I've certainly never seen anything like it anywhere else. That's what I love about West Ham. Oh, and West Ham fans have a sense of humor, too. We have to.

College football fans--and I do still very much love American college football, for the record--like to talk about the "color and pageantry" of the game, and both qualities are definitely there at most schools. But English football offers its own "colour" and pageantry, and it's all driven by astonishingly dedicated supporters who, in some cases, really do commit their lives to their clubs. And when the "colours" are the claret and blue of West Ham, all the better. If I lived anywhere near London, I'd be at the Boleyn Ground for every match, every season--or, at least, I'd want to be there. As it stands, I'm thrilled to have had the chance to go once, and I can't wait to get back again. As you might imagine, there will be more on this topic to come...