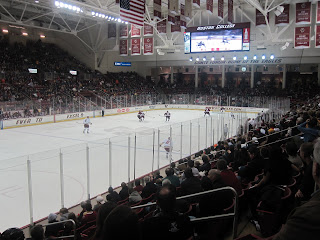 Tonight was not my finest hour as a sports fan. My regular hockey buddy and I went to the UMass-BC game and saw easily the best contest we've seen this year, a tight, physical game that ended in a 1-1 tie.

Except it didn't end in a 1-1 tie. In a colossal mental lapse, I forgot how college hockey worked. I said to my buddy, "There's no overtime in college hockey unless it's a tournament game." So, after the clock read 00:00 in the third period, we bolted, hoping to beat the crowds out of a relatively full Conte Forum--surprisingly full, in fact, given that BC's "spring break" inexplicably started tonight.

In my defense, a lot of people poured out of the arena with us--hundreds, at least. I did find it odd that the BC pep band played an up-tempo song as we were leaving rather than easing into the alma mater, and I also thought it strange that so many people were sticking around for the three stars of the game and the home team's stick salute. Proud supporters, I thought. Really proud. Unusually proud.

Well, as it turns out, college hockey does indeed have an overtime--it just doesn't have a shootout after overtime the way NHL regular-season games do. I somehow confused the lack of a shootout with the lack of an overtime, period...and we missed BC's game-winning goal at 2:02 of the extra session. It wasn't until I got back to my friend's place and decided to read about the game online that I realized that we had bolted early.

We both decided that it was OK that we had left early, though. We enjoyed the game and had a good night out, and while it would have been nice to celebrate an overtime winner, I'm not such a die-hard BC fan that I was crestfallen upon realizing my error. (I do cheer for the Eagles, though, and I found myself really pulling for them in the third period tonight.) In fact, while I usually stay until the end of a sporting event, I was kind of glad that we got out when we did. It made the trip home that much easier. Sometimes, that's not a bad thing.

As for the game, UMass out-shot and mostly outplayed BC and probably should have won; BC's freshman goaltender turned in a fantastic performance and made up for a lot of BC defensive errors in the Eagles' zone. The teams combined for nearly 70 shots on goal and doled out tons of hits--far more than we usually see at a BC game. Then again, to be honest, BC is usually up at least 3-0 by the middle of the second period and doesn't really need to hit anymore at that point. Tonight, though, the play was physical from start to finish. The shots were hard, too, sending pucks exploding off the glass and boards.

With all of the excitement, the crowd was on edge--when BC nearly scored the winner in the final minute (of regulation...ahem), the noise in Conte was as loud as I've ever heard it. And that was with a smaller-than-usual student section stuck way up in a corner of the arena rather than planted in its usual spot behind the visitors' goal.

So, we missed the cherry on top of the hockey sundae tonight. The ice cream was still good, though (this really seems to work well for a hockey metaphor, actually), and the metaphorical whipped cream was tasty. A little winter-time hockey sweetness is much better than none. And, really, we saw three pretty sweet periods of hockey. There's one home game left for BC this season, next Saturday night vs. Hockey East-leading New Hampshire. Should that contest end in a tie after three periods, we'll be sure to stick around for the whole dessert, cherry and all. By the way, as always, my unedited and unvarnished photos from the game are online.

Next game (and last for this season): Next Saturday night (March 6) vs. UNH. Go Eagles!
Posted by Lee Pender at 12:47 AM

Email ThisBlogThis!Share to TwitterShare to FacebookShare to Pinterest
Labels: hockey, photography, sports, what a shame