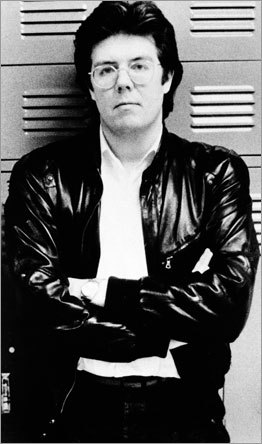 I didn't really know who he was when I was a kid (I wasn't hip to much back in Midlothian, Texas), but I sure knew his movies. Aside from inflicting Home Alone upon us, John Hughes wrote and-or directed some of the most important and memorable movies of my childhood and even much of my teenage-hood--even if I didn't see a lot of them until years after they came out.

In so many ways, John Hughes was the '80s, and I'll admit that I've been a tad nostalgic for the '80s lately. Maybe it was going to Kansas City, seeing the Royals live and getting my photo taken next to George Brett's statue, or maybe it was just escapism from a lousy economy and a mostly dreary summer (although today was gorgeous here in Greater Boston), but the '80s had been on my mind even before I read about Hughes's death. Now, I'm in full nostalgia mode.

The funny thing is that some of Hughes's movies--for me, anyway--haven't really stood the test of time. Ferris Bueller's Day Off, which I watched again not long ago, just isn't that funny through adult eyes. In fact, it's pretty lame. The Breakfast Club does remain utterly re-watchable, though, and it probably always will. The same goes for classics like National Lampoon's Vacation...and, if I'm honest, I even liked Uncle Buck. Kind of a lot.

Still, more than their quality, it's the impact of the movies Hughes was involved with that really impresses me. In an era when cable TV was well on its way to expanding our entertainment options beyond three networks plus PBS (but before the Internet became a widespread consumer reality), Hughes had the rapt attention of kids, teens, and probably even twenty-somethings as few other writers or directors did. His movies fed us the lines that we would repeat for years--and still do (Bueller...). He could pull off the guy movie and the chick flick with equal flair. More than that, though, Hughes's movies defined my generation--literally told us who we were, what we thought and where we were (or weren't) going. If you weren't there, I can't explain it. But if you were, you might just be nodding your head right now.

I don't know whether anybody is doing that for the current generation of texting, Tweeting teens. I don't know whether or not it was a positive thing that John Hughes had so much influence over my generation. But I do know that, after Michael Jackson, another icon of my youth--or, more accurately, the writer of the script of my youth--has died. I'm starting to feel that mortality thing creeping in now, and I don't like it. I think I'll cheer myself up by watching Mr. Mom. Or maybe I'll just move on and do my best to live in 2009. Yes, that's probably a better idea. But if I see Weird Science on HBO anytime soon, I'm still going to watch it...
Posted by Lee Pender at 12:03 AM

Email ThisBlogThis!Share to TwitterShare to FacebookShare to Pinterest
Labels: disturbing childhood memories, i'm getting old, movies, pop culture, the 1980s, what a shame, youth is wasted on the young