I've already gushed about Washington, DC's Nationals Park to the extent that I think it best to keep the text of this post relatively short (as if that's going to happen). In fact, I probably gushed a bit too much and a bit too soon--I actually ended up liking the New K in Kansas City better than Nationals Park, but we'll get to the New K in the next (and last) stop on the Ballpark Mini-Tour Review.

All that's really left to do here is add some photos to the description of the park--and maybe reconsider some of the more hyperbolic gushing I committed back in June. The first and perhaps most important thing to know about Nationals Park is that it's in the middle of nowhere, a space otherwise known as the Washington Navy Yard on the not especially beautiful Anacostia River. Access to the park is easy from the excellent DC Metro system, but there is zero atmosphere outside the stadium. (OK, so there's a parking lot-type thing called "The Bullpen" that seems to have drinks and music, but it looked...well, sort of dodgy, honestly--or, at least, less than exciting.) 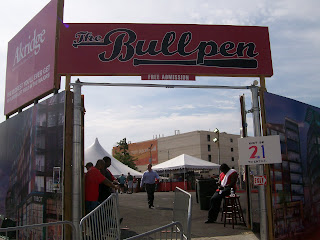 Given that there's nothing do to outside the park, all of the entertainment is inside. Fortunately, there's plenty of it, and it starts well before game time. (The place was rocking two hours before the scheduled first pitch on the day I attended.) There are DJs and live bands (yes, live bands), and there's a whole slate of programming that airs on the stadium's awesome Jumbotron (see photo), as well as on the many hi-def, flat-screen TVs conveniently positioned around the park. 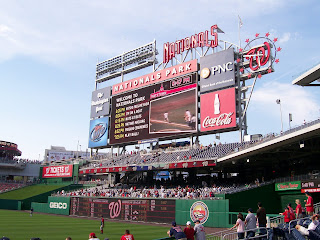 The entertainment options range from the relatively sublime, such as a play area for the kids, 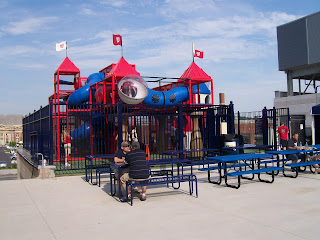 a Build-a-Bear Workshop (also for the kids) and a PlayStation video arcade (for the older kids, I guess), to the completely ridiculous. That would be the dunk tank--no, I'm not kidding--in which sits some poor guy wearing the rival's jersey of your choosing. On the day I attended Nationals Park, with easily 30,000 Red Sox fans pouring into the Stadium, the poor fellow was, naturally, clad in a Yankees shirt. 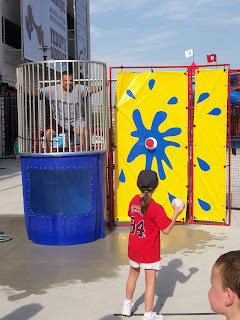 To my memory, Phillies, Mets and maybe Orioles jerseys were also available for wearing by whichever schmuck got stuck in such a lousy job. (Although...it was so hot on the day I was at the park that the dunk tank didn't look uninviting.)

Apparently, somebody had the idea to build Nationals Park so that it would offer a spectacular view of the spectacular DC skyline, Capitol Building and all. Well, that's what somebody did...and then somebody else went and ruined the whole thing by building a parking garage that blocks the view of everything but the top half of the Washington Monument. (That's the garage with the red roof in the photo; the little bits behind it are what I would have seen of the Washington skyline had parking not been such a priority in a place that's probably 100 yards from the nearest Metro station.) 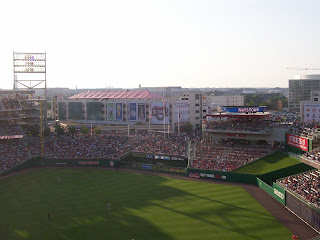 Still, despite some of its more puzzling features, there's a lot to like about Nationals Park. It's exceptionally spacious and open--even with a packed house, the park never felt crowded--and while not beautiful in a traditional sense, it's not unattractive. I was especially pleased with the large, open plaza at the park's main entrance, 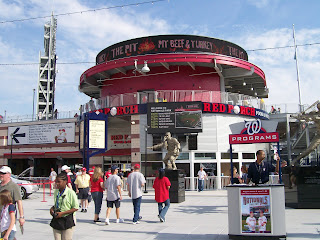 and I also liked the park's collection of funky and decidedly non-traditional (which seems appropriate, given that the Nats themselves have almost no history) statues, which seemed to try to illustrate the swings of Frank Howard and Josh Gibson and the pitching motion of Walter Johnson, all three Washington baseball luminaries in one way or another. 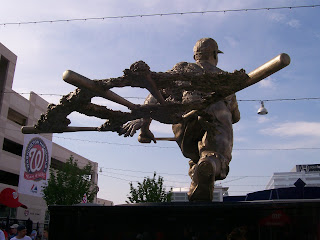 Other than the parking garage, probably the most disappointing aspect of Nationals Park is the home team, which is currently slugging out out with Kansas City to avoid being the worst team in baseball--or, perhaps, to finish dead last and get the first pick in next year's draft. Other than a good team, Nationals Park has pretty much everything a fan would want from a new park--tons of clean restrooms, a large number and wide variety of food stands, lots of beer stands (some with half-decent selections), great souvenir shops, the friendliest staff I've ever encountered in sports (seriously)...and an owl. 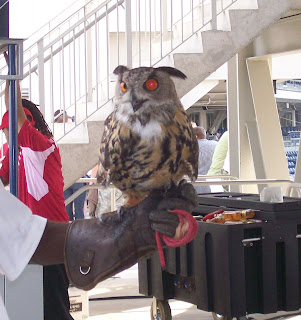 What more could anybody want? All in all, it's a fun day out--I had a good time despite watching the Red Sox get dismantled by a last-place team. I loved Nationals Park; in fact, I liked it so much that I've kind of become a fan of the Nats. Our nation's capital should have a baseball team (even if it's one stolen from Montreal), and I hope that the third go-round for Major League Baseball in Washington will be the one that sticks. In that sense, I'd like for the team to be good so that the city will support it. That, however, might be a tall order. Apparently, seats aren't hard to come by when a big-name opponent isn't in town.

You never know, though. DC is a big market, and with some player development, solid drafts and a little luck, Nats games could have crowds like this 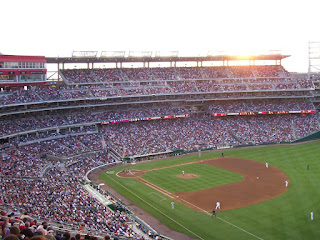 every night before too long.
Posted by Lee Pender at 10:16 PM

Email ThisBlogThis!Share to TwitterShare to FacebookShare to Pinterest
Labels: baseball, domestic travel, leisure, sports, summer, this could be the start of something big