I'll just come out and say it: I didn't like Busch Stadium all that much. It's a great park for baseball traditionalists, which I'm not. So, for those of you who love Fenway, Camden Yards (I guess--I've never been there) or Wrigley (nope, haven't been there, either), you might not like this post. But here it comes, anyway.

First off, St. Louis is a baseball town all over. The scene around Busch Stadium in downtown St. Louis is Fenway-esque, except without the charm of the Fenway area. Cardinals fans deck themselves out in team gear and show up in droves in the restaurants and bars in St. Louis's somewhat depressing downtown area. (OK, so the photo's a little dark--the lighting in the pizza place where we had dinner before the game was pretty bad for taking pictures.) 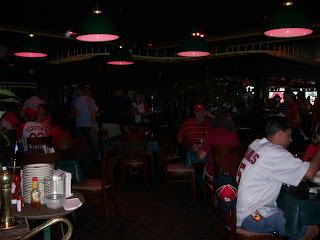 There's no questioning their passion, even if they do kind of come off as the Yankee fans of the National League--somewhat arrogant, always expecting to win, generally just a bit obnoxious. (Then again, with 10 World Series championships [the last in 2006], the Cardinals are the most successful team in NL history and the second-most successful--behind the Yankees--in baseball. So, at least their team can back up their bravado.)

OK, so maybe the comparison to Yankee fans is unfair. There probably isn't another set of fans in sports that's that obnoxious and generally hard to take as the Bronx faithful. Cardinals fans might actually be more like (forgive me, but I have to say it)...post-2004 Red Sox fans. In fact, that's pretty much exactly what they're like. But you get the point. Yeah, they care about their team--which is cool. But the atmosphere they create is more intense than fun, and while that sort of thing is great for (either kind of) football or for hockey, it must be hard to take for 81 home baseball games a year. Lighten up, folks--sure, every game counts, but there are 162 of them before the playoffs even begin. Save your energy. Dial it down from 11 to, say, 9.

Anyway, back to the park itself. It's not much to look at from the outside, given that it's mostly built down into a hole. The lights are nearly at street level, and there's certainly no grandiose facade. 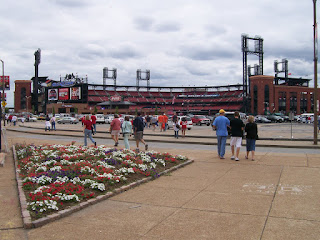 But...the whole built-in-a-hole thing does yield absolutely the best feature of the park, which is this: 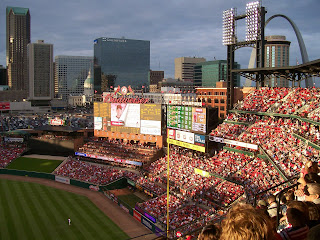 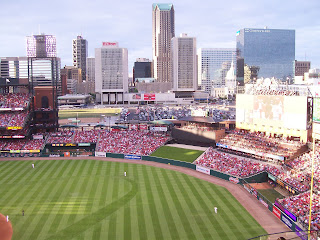 Yes, the skyline views are absolutely spectacular (and, yes, somebody mowed an arch into the outfield for the All-Star game, which had taken place just a few days before the game I attended). So, give Busch Stadium that--it's beautifully sunken into the city. Plus, it has some other cool visual features, such as a pretty nifty, stat-packed scoreboard-Jumbotron combo 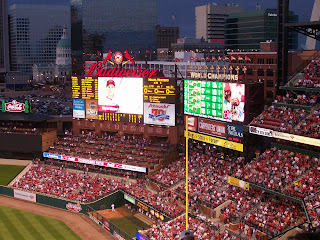 and a lineup of banners that's tough to dispute, unless you're a *spit* Yankee fan. 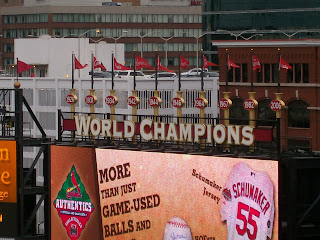 The sight lines and so forth seemed fine, too, although we were sitting pretty high up, as the pictures of the park indicate. Still, we could see on the field what we needed to see. As far as comfort, the seats seemed a little smaller than they should have been in a new park, but they weren't uncomfortable. And there were drink holders for Bud, Bud Light, Budweiser American Ale or whatever other "local" product was on offer for swilling.

But, for me, what Busch Stadium lacked was non-game stuff to do. This is where the traditionalists might want to stop reading. Yes, sure, I go to the ballpark to watch a baseball game. But I also like the extras--the little activities and creature comforts that add to the atmosphere and experience of a game, the things you can do if you get to a game early or the places where you can send your wife or girlfriend or kids if she or they just aren't into the game. Busch Stadium is pretty straight-up baseball; the only area I can remember that had a leisure-time feel was this one 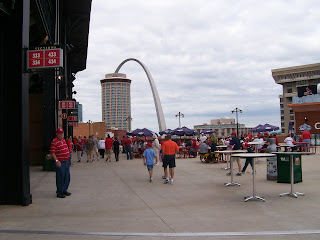 and I honestly wasn't sure of the point of it. It had a great view, as the whole park does, but it was fairly stark and didn't even seem to have that many food stands. It certainly didn't have--from what I could tell--any sort of kids' activities or places where the ladies could comfortably chat over drinks while the gents take in the game. (Yes, I realize that there are a lot of female baseball fans, and I realize that a lot of women who don't like baseball do actually watch the games when they go to them. I get that. But all I'm saying is that I've had the bored-female experience at sporting events [although not recently, to be fair], and it would have been great for me to have been able to say, "Why don't you go hang out in that restaurant area or play a round of miniature golf?" By the way, there will be more on miniature golf when we get to Kansas City...)

What I'm saying is that Busch Stadium is a baseball park for baseball fans, and most baseball fans will love that. But for the rest of us--the casual fans who don't mind missing an inning or two to stretch our legs a bit and entertain ourselves in some other way--there isn't much there except the opportunity to stare at the Arch. That's why I didn't like Busch Stadium that much. It goes for an old-fashioned feel and achieves it, mostly, but I'm really more of a fan of the newfangled ballpark.

Plus, Busch is incredibly crowded. Granted, the Cardinals like it that way--the games sell out or come close, which helps keep the team competitive despite its relatively small TV market. But for a stadium that opened in 2006, Busch's corridors, food areas, bathrooms and shops are ridiculously crowded--almost Fenway-style packed. There's just no excuse for that. A new stadium should have plenty of space to roam--as Nationals Park did despite a sellout crowd with the Red Sox in town.

So, while Busch Stadium boasts a successful club, rabid fans and a lot of pretty views, it isn't, for me, the palace that I had heard it was. It's visually interesting--even arresting--but there's less (and less space) on the inside than there should be. Would I take it over Fenway? Actually, yeah, but I'd take almost any park over Fenway. That, though, is another post for another time.
Posted by Lee Pender at 10:21 PM