The Boston Globe Manages to Do Something Clever Online 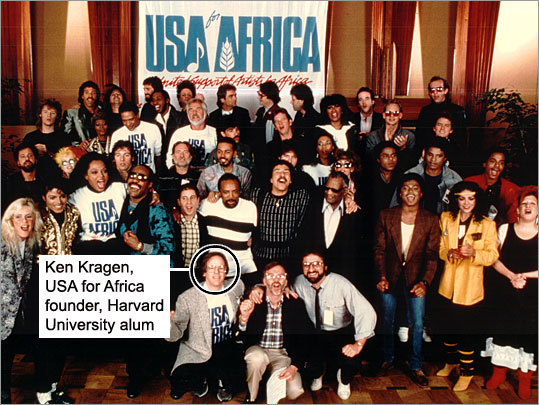 Pity the poor Boston Globe--for as long as it's still with us. The boring broadsheet has produced what is mostly a weak Web site, with constant failed attempts at coming up with cute little slide shows or offbeat articles, most of which end up being way too...well, on beat, I suppose.

Nevertheless, I do read the Globe online every day because local TV news hit rock bottom years and then started digging into the rock to try to actually get worse...and I prefer NPR to local news radio in the car. Plus, the Globe is woefully un-hip, and so am I--so at least we have that in common. (Oh, and I've just never been a big fan of the Herald--it's really better for readers who live right in the city, not out in the 'burbs.)

Having said all that, I did find one of this week's gimmicks pretty cute. Apparently Michael Jackson's death has led to renewed interest in the old charity tune "We are the World." Well, this week, the Globe featured a fun little quiz, asking if readers could identify certain celebrities who took part in the famous recording of the song. Given a distance of almost 25 years, some of the participants look a little less than familiar now (and a few are a lot less famous). Most people older than 30 will probably ace this little test...but I'm ashamed to admit that I misidentified a famous face or two. I won't tell you which ones they were.

Anyway, well done to the Globe for actually sucking me in with a goofy Web vehicle for once.
Posted by Lee Pender at 1:08 AM