A Bit Early, but That's OK

Today is the day we celebrate the birthdays of my sister-in-law and her daughter, my middle niece. Given that I also have a December birthday, my wife's family has decided to include me in the celebration. The family is doing this despite my mild protests--I'm a bit superstitious about birthdays (dumb, I know), and don't like to celebrate them until they actually arrive. Mine is on the 20th.

Anyway, the best thing about this early birthday celebration is the spectacular cake my lovely wife made for it: 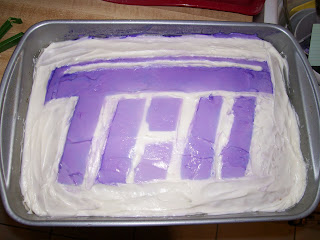 Yes, that's the famous "flying T," the logo the TCU Horned Frogs wore from the late-'70s until 1992 (my freshman year at TCU, oddly enough), when the current "arched TCU" logo came into fashion. The flying T doesn't exactly bring back memories of TCU's most successful years (the football team was mostly a real loser during that time), but it is the logo of the Jim Wacker-coached teams I fell in love with in the mid-'80s, particularly in 1984. That's when Kenneth Davis and the smash-mouth, "TCUnbelieeeeeeeeeeeeevable" Frogs were shocking the Southwest Conference on their way to their first bowl appearance in almost two decades. (We won't talk, of course, about what happened after that because we're all about happy memories today.)

I'm still very nostalgic about the flying T, of course, and I still love the way it looks. TCU won the last game in which it sported the flying T with a Matt Vogler-to-Stephen Shipley touchdown pass in the dying seconds of a wind-swept game at Amon Carter Stadium to beat Houston 49-45. TCU went 7-4 that year, and although we missed a bowl game (there were a lot fewer of them back then), the Houston win was a great way to cap the Wacker era and send the flying T off with a victory.

Of course, the TCU football program is better now than it has ever been, arguably (with due respect to the team that was the nation's winningest in the 1930s), and I wouldn't trade today's success for anything. But I do like to remember who we were, where we came from and what we went through as fans and as an institution to get where we are today. So, for my 15-day-early birthday celebration, I salute the flying T, and I will surely enjoy devouring it, too.
Posted by Lee Pender at 2:05 PM