The Completely Unexpected Return of Summer

New Englanders love to use the same expression that I heard so often growing up in Texas: "If you don't like the weather here now, hang around for a few minutes and it'll change."

Unfortunately, that old saw doesn't hold true for either location. From December through March (or, if we're unlucky, November through April), the weather in New England doesn't actually change much at all. Cold temperatures, snow and freezing rain are on the menu pretty much all winter long; last year, we lost sight of grass and sidewalks sometime in December and didn't see them again--in my memory, anyway--until sometime in late March.

In Texas, the concept is much the same, even if the effect is different. From sometime in May until...well, mid-October in a good year, Texas is hot. Really hot. Blast-furnace hot. OK, there's the occasional thunderstorm or torrential downpour to break things up a bit, but the weather doesn't change very often in a Texas summer. It's pretty predictable. So, if you do hang around for a while in Texas, you'll likely just end up feeling hotter than you did when you arrived.

What we do have here in New England is seasons, and they tend to stick to a pretty strict schedule. Unfortunately, though, summer, which usually makes its debut sometime in June, waited until August this year to arrive. So, when Friday and Saturday last weekend came off cool and rainy (and followed several days with highs that struggled to reach 65), I resigned myself to the notion that fall had arrived. I even had a Spaten Oktoberfestbier at Sunset Grill last Wednesday night. On Saturday, I watched soccer and college football and mostly got into my fall-winter sports mode.

And then Sunday happened. Out of the blue--more like the gray, really--we got a stunning, June-like New England day. High of about 75, light breeze, high clouds floating in blue skies...it was amazing, fantastic and totally unexpected. Weather is an awfully big deal here. It dominates life for four to six months of the year (winter) and is always kind of in the back of everybody's mind. In places that get 300 days of sunshine a year, weather usually just sort of rests in the background. Here, it's a factor, a part of life that affects work, play and rest pretty significantly.

We don't waste a lot of summer here in New England. Hang around Greater Boston on a summer day, and you'll see people biking, swimming, jogging, motorcycling...whatever, doing stuff that we can't do for most of the year. Sitting at home by the air conditioner (for those who have one) is not a particularly popular option.

So, with Sunday turning out to be a gem, my wife and I headed for Good Harbor Beach in Gloucester, Mass. (Yes, 75 and sunny is a beach day here, especially in September.) And the whole day was just fantastic. 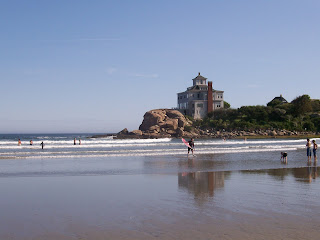 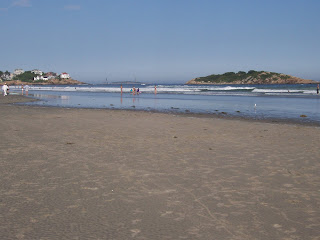 We would have enjoyed the beach regardless, but what we didn't expect was...waves! Real waves, at least six feet high and maybe taller--a real rarity on New England beaches. I don't know why they were there or whether they're common in Gloucester, but I do know that I enjoyed crashing into them, body-riding on them and generally getting slammed around by them. This wasn't just a bonus Sunday; this was a super-bonus, huge-wave Sunday. Beautiful. As is so often the case, the camera didn't really capture the size of the waves... 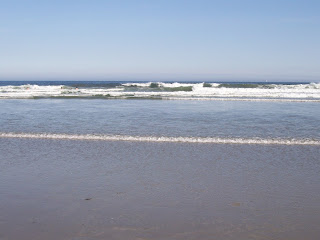 but the surfers knew where to be when the tide was rolling in... 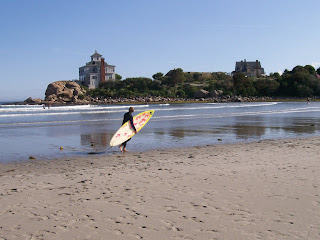 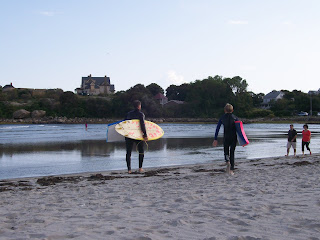 which hopefully gives me some credibility when I say that the waves were pretty high.

Anyway, I'm past the point of rambling now. The real point of this post is that living in New England has taught me to appreciate every sunny day, pond day, bike day and beach day I get. Oh, fall's beautiful, and even winter has its charms--although it's still very tough for me. (Spring is mostly rainy.)

But there are only a few months of summer every year (if we're lucky), and we got a little extra on the tail end of the season this year. There are beach days, and there are beach days. Some are fun; others are completely unforgettable. This one fell into the latter category, and I hope that when I'm sitting at home in mid-March next year yelling at the Bruins game on TV, I'll be able to look back on this post and remember that there's always hope after the snow melts. And that if I wait around a while--say, four months--the weather really will change.
Posted by Lee Pender at 5:52 PM