Ewing Kauffman was a pharmaceutical entrepreneur, a tremendous philanthropist and the owner of the Kansas City Royals from the club's inception in 1969 until his death in 1993. The late Mr. K is a legend in Kansas City, not just because he made the Royals a model baseball franchise but also because he was the classic big-hearted, self-made, lovable rich guy who walked right out of some sort of cheesy feel-good movie or modern fairy tale and into the heart of the American Midwest--which, as it turned out, happened to be his native home.

Mr. K was the heart and soul of a franchise that began its rise to prominence in the mid-'70s, when the Royals won several AL West titles but seemingly always ran into (and lost to) the Yankees in the playoffs. In 1980, the Royals and their charismatic on-field leader, the immensely legendary George Brett, broke though and beat (swept in three games, actually) the Yankees in the AL Championship Series...only to lose the World Series in six games to the Philadelphia Phillies.

Finally, in 1985, the Mr. K's Royals snatched baseball's crown, winning the World Series over their cross-state rivals, the St. Louis Cardinals, in seven mostly riveting and sometimes controversial games. The World Series win was either the greatest or second-greatest moment in Kansas City sports history, with only the Chiefs' upset of the Minnesota Vikings in Super B0wl IV to rival it. The fact that the Series victory came over the traditionally successful Cardinals, the standard bearers of baseball in the Midwest for most of the 20th century (and most of the 21st, too), was especially satisfying for KC fans. It was the greatest moment in Royals history.

The Royals haven't made the playoffs since. They were competitive into the early '90s but soon faded into Major League oblivion. It's a long, sad tale, but Mr. K's death in 1993, an unfortunate transfer of ownership, and the baseball strike of 1994 left the Royals a battered franchise. They've been among the worst teams in baseball for the last 15 years, and this season is no different--they're currently 31 games under .500 and battling the Washington Nationals to avoid (or achieve?--that first draft pick would help) the worst record in baseball.

It stands to reason, then, that the Royals renovated Kauffman Stadium--which was actually Royals Stadium until about a month before Mr. K died--and essentially opened what was in effect a brand-new park for the 2009 season. Struggling teams need ballparks that will attract fans, facilities that can pull them in with diversions that don't have anything to do with what's going on on the field. (Plus, a nice, new park sends a message to free agents that a team is serious about competing--even if KC's relatively low payroll and generally inept ownership don't.)

The "New K," as folks in KC call it, technically isn't new--it sits where the old stadium sat and is really just a renovated facility. But the word "renovation" doesn't really seem appropriate here--evidently, from what Royals fans say, the club pretty much gutted the place and rebuilt it from the ground up. And it's a masterpiece--a fitting tribute to Ewing Kauffman's legacy.

The defining feature of the "old" stadium was the fountains that flowed just beyond the center-field wall. Kansas City is the city of fountains, after all, with more fountains per capita (or per square foot, or per square mile, or something like that) than any other city in the world. (No, really, there's some statistic to that effect--I just don't remember what it is. Anyway, there are a lot of fountains.)

KC is actually a lovely city aside from a few rough neighborhoods, the likes of which exist, unfortunately, in pretty much every American city. KC's ever-improving Downtown, with its charming and authentic late-1800s feel, is full of pleasant surprises and trendy areas (for those who know Fort Worth, think of a larger version of Sundance Square), and the Plaza and Crown Center areas are fantastic--arguably world-class, especially in the case of the Plaza.

Anyway, the New K has kept the fountains flowing, offering a rushing-water sound in the outfield that's oddly pleasant and relaxing (and, unfortunately, fairly audible, given that the Royals don't pack the park very often these days). 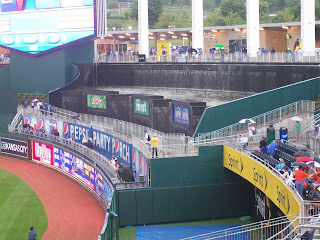 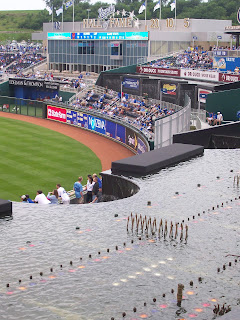 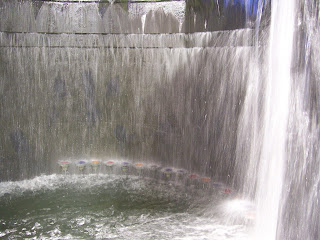 Rumor has it that the fountains shoot into the air and light up with colors when the Royals hit a home run, bring out their closer to finish a game or actually manage to win--but, given that none of those things happened in the double-header we saw, I can't be sure exactly what the fountains do. By the way, that double-header was the result of a rain-out from the night before. The night of the rain-out, we spent several hours at the park hoping the game would start--which turned out, oddly enough, to be a lot of fun. And, yes, one ticket got us into both games of the double-header the next day. That would never happen at Fenway--but, then, the Sox will probably make the playoffs this year...

The New K is intimate without being suffocating and spacious without feeling soulless. That's the beauty of it. Fans can actually circumnavigate the park without leaving it, and the corridors seemed wide enough to accommodate a park full of fans, if the Royals could ever manage to have one. There were plenty of bathrooms and lots of beer and food stands, and the team store (always important to a souvenir junkie like me) was nothing short of fantastic. 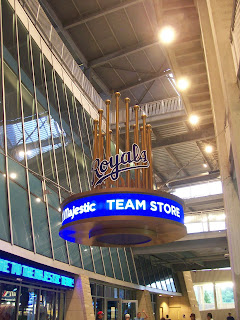 Of course, the George Brett 1980 throwback t-shirt was (and is) a particular favorite of mine. In fact, the Royals, a franchise with a short but rich history, seem very concerned about reminding fans that the team used to be good. There are statues beyond the fountains of club legend Frank White, former manager Dick Howser...and, of course, of the great George Brett, one of my favorite athletes of all time and a childhood idol of mine even though I wasn't particularly a Royals fan. Here I am with George (sort of) wearing his jersey (sort of): 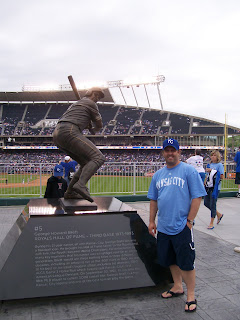 There's also the Royals Hall of Fame, brand new this summer (along with everything else at the New K, I guess), which was so crowded that I couldn't get into it either night I was at the park. 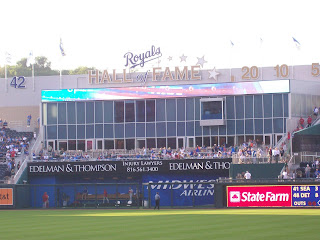 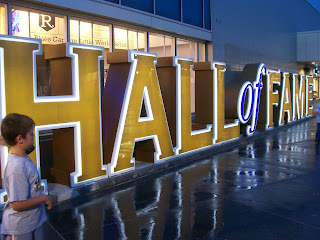 Aside from statues and nostalgia, there are plenty of entertainment options at the New K--and the great thing is that most of them actually have something to do with baseball! OK, so the fairly inexplicable miniature golf course doesn't...really... 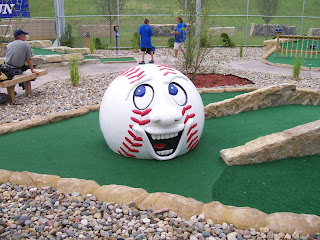 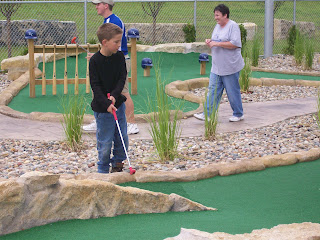 but the pitcher's mound, batting cages and base-stealing area (I'm not sure what else to call it--it's a place where kids can run from one base to another and time themselves) all do. 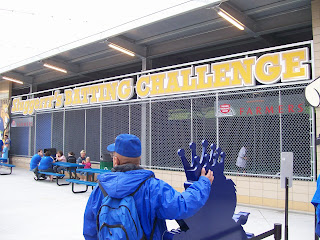 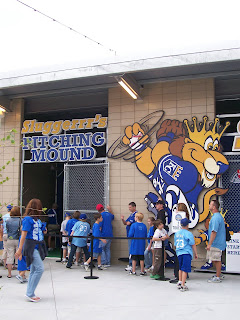 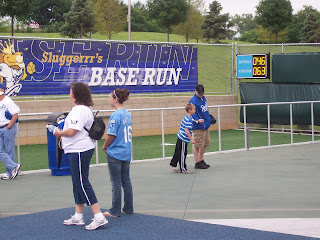 But the crown jewel of kids' activities at the New K is the Little K, a fantastic little mini-park within the park where kids can, well, play baseball (with, apparently, some sort of adult staff member helping out a bit). 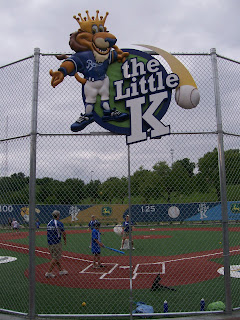 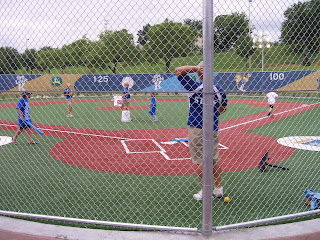 For the adults, there are plenty of wide-open spaces for dining or just walking around, each within eye-shot of a hi-def TV of some sort in case folks want to see how badly the poor Royals are losing. 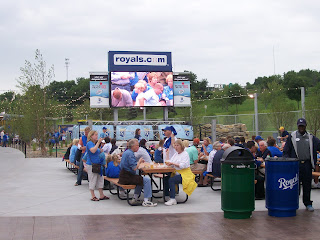 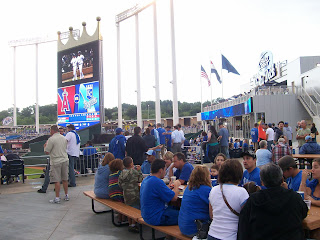 And then there's the dominant feature of the park, the crown jewel--so to speak. Absent a skyline to show off--the park is a few miles outside downtown, right next to Arrowhead Stadium--the New K sports (as the old stadium did, but not in hi-def) a magnificent, crown-shaped, hi-def scoreboard and video screen. It's phenomenal, actually...and it sort of ties the park together somehow. 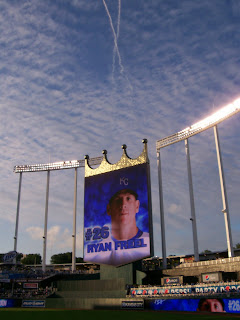 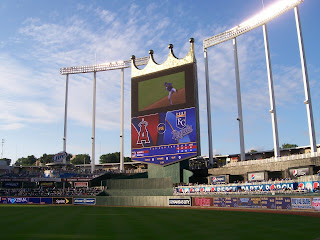 Behind the fountains and underneath the colossal scoreboard is a nice little outfield porch area where fans can wander up from their activities (or from eating some pretty darn good barbecue--this is KC, after all) and watch the game for a while. It's an open, pleasant and relaxed area that I can imagine could get to hopping if the Royals ever got involved in an important game. (You can kind of see it behind George in this photo:) 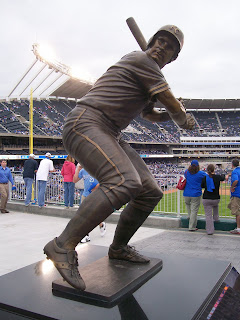 Everything considered, the New K is my favorite ballpark, beating out Nationals Park (which probably comes second), Busch Stadium, whatever Jacobs Field in Cleveland is now, the Texas Rangers' stadium (once known as The Ballpark in Arlington) and Minute Maid Park in Houston--where I never saw a game but did attend an event. Oh yeah, and Fenway...I liked the New K better than I like Fenway.

Kansas City is a lovely city that probably doesn't get the attention it deserves as a great American destination. And since the poor Royals are so awful, the New K doesn't get much time on national TV. But both places are worth visiting--and I'd love to go back to both. (One huge thing that I forgot to mention about the New K: it's a pretty car-dependent stadium, but that means that there are huge, often empty parking lots that are perfect for tailgating...one of the great traditions of American sports and an activity not possible at many ballparks. Nice.)

I loved the New K so much, in fact (and the fans in it), that I've started following the Royals. I've become a bit of a fan. I read the KC Star's coverage of the team pretty much daily and get an e-mail alert with score and stats from Major League Baseball after every Royals loss--sorry, I mean game. I'd actually love to see them get back to their winning ways. In the meantime, though, Royals fans will have to settle for having a first-rate ballpark that honors the good name of the team's founder. 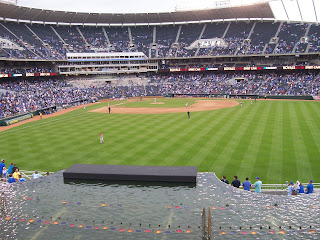 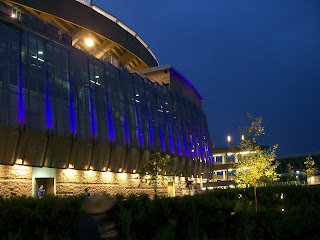 Email ThisBlogThis!Share to TwitterShare to FacebookShare to Pinterest
Labels: baseball, domestic travel, i can't believe you read the whole thing, sports, summer, the 1970s, the 1980s, this could be the start of something big