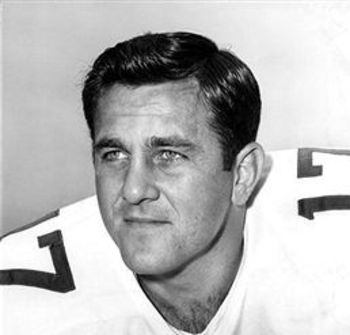 There will never be another Dandy Don Meredith. That much we know. Never the greatest quarterback for the Dallas Cowboys, he was nevertheless a very good one and an extremely tough one.

Long-time Cowboy fans like my dad probably remember the mid-'60s Cotton Bowl years as the best time to watch the team. Sure, Tom Landry's early teams couldn't get past the Packers. They lost heart-breakers in the playoffs. Meredith screwed up at the ends of big ballgames. Fans booed; sportswriters bristled. Roger Staubach would come along within a few years and make everything OK.

But real fans always have an affinity for those early teams that struggled, for the predecessors to the greats. Native New Englanders still talk with some nostalgia about Steve Grogan and the '70s Pats, about how Sugar Bear Hamilton was innocent and how the best New England team to come along prior to 2001 got robbed. Pat Patriot and the old red uniforms are still favorites around here.

As a TCU football fan, I'll forever be a Wacker Backer. I remember with fondness our rare victories in the '80s and early '90s and even some of our close losses. Stephen Shipley's last-second touchdown catch to beat Houston in 1991, in Coach Jim Wacker's last home game, remains one of my favorite sports moments. Names like Falanda Newton, Tony Jeffery and Matt Vogler are still special to me.

The championships help, of course. It's easy to remember Dandy Don now that Staubach and Troy Aikman have come and gone. Tom Brady makes the memories of Grogan seem a bit sweeter. Andy Dalton adds to Matt Vogler's nostalgic legacy. Do Cleveland fans look back with misty eyes on, say, Brian Sipe? Probably not. Success makes almost everything that preceded it seem sweeter.

Back to Dandy Don. He's one of those athletes who just predated my time, having retired a few years before I was born. And yet I feel as though I knew him, and not just because I did know him from his Monday Night Football years. He was a Dallas guy, a real one, an SMU All-American and Cowboy quarterback. He was quite literally the first Dallas Cowboy. In terms of his near misses in Dallas and lack of championship success, he was sort of my dad's Danny White, except that nobody came before Meredith in Dallas and that Dandy Don was a heck of a lot more fun than Dull Danny.

When I was a kid, Monday Night Football was still a huge event. It was still a cultural touchstone. Monday night games meant a lot--they were enormous for the cities and franchises involved, and they produced memories as lasting as many, if not most, of those that came from playoff games and Super Bowls. Howard Cosell--a television great in his own right, but one famously different from Meredith--Frank Gifford and Dandy Don made NFL football. They really did make it. No longer was the NFL a staid Sunday-afternoon fall pastime. It was cool. It was edgy. It was fun.

All of that's gone, of course. The 24-hour news cycle and the Web have swallowed the old notion of an "event," particularly one that happened every week from September through December. TV sports announcers try way too hard. Some try to be clever; others try to be controversial or bombastic, and still others try to be smarter than everybody else. Almost all of them fail. And with the NFL on five nights a week now, there are too many games and not enough good commentators.

The era of Monday Night Football ended almost 30 years ago. Don Meredith rode off into the sunset not long afterward. But with his passing, we should celebrate what he meant to Dallas sports and to American culture. No matter how badly he was hurt, no matter how much fans resented him, no matter how much flack he took from the press, he kept his cool. He didn't always win, but he never let his detractors get his goat. There's something very admirable about that. And very rare these days.

Beyond that, as an all-around fun guy, as a '70s icon, it was hard to beat Dandy Don. His decade on Monday Night Football was a high point for American entertainment and perhaps the absolute peak of the NFL as theater. But it's all over now. Meredith's days in the spotlight are long gone, and so is he. I'll miss him, not as a former fan but as someone who appreciates what he represented to a generation of football fans and to a young kid from Texas who used to beg his dad to let him stay up and watch the games on Monday nights.

The party has been over for a while, but now it's time to turn out the lights on the life of the great Don Meredith. Unfortunately, tomorrow will not start the same old thing again.
Posted by Lee Pender at 1:57 AM