Well, this was exciting. I read Tuesday morning in the Herald that a few Patriots, including Tom Brady and Vince Wilfork, would be in Waltham on Tuesday afternoon to help build a playground at the Boys and Girls Club. I live about a 10-minute walk from the club, so I figured I'd take the lad down to see what we could see.

My lovely wife and I trooped down with Isaac to Exchange Street around 2pm to find a few people waiting outside the Boys and Girls Club building. What we quickly came to find out was that this was not an event for the general public--it was intended for supporters, volunteers and members of the Boys and Girls Club. We don't currently fit into any of those categories. That's actually pretty important to this story.

The playground is outdoors but not visible from the street, so we decided to wait for the players outside the entrance to the building. That made us celebrity stalkers, something we had never been before. A few folks waited with us: a radio DJ from a station in Providence with her two kids, a retired school teacher with two kids in a huge stroller, a mom whose kid didn't appear to be there and a young man holding an autographed football.

Brady had been the last to arrive, and we figured that he would be one of the first to leave. As the players trickled out, though, he wasn't among them. They were friendly as they left the building, but they were clearly headed home. Most of them smiled and waved but didn't really stop as they headed to their cars--remember, this was not an appearance for the general public that they were making.

Nevertheless, Ike and I made our way among them. A mother had arrived with a two-week-old (even smaller than Isaac!) baby, and she approached Jerod Mayo for an autograph, which he signed for her. 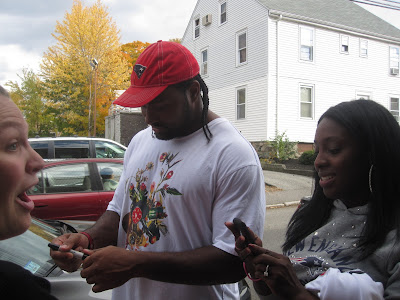 The lady with him (I don't know who she was) was very friendly and started asking whether Isaac and the other little baby were twins. I said no, and she cooed over how cute both of them were. Players were headed to their cars by now, so Isaac and I started scouting out interesting faces while chatting politely with Jerod Mayo's friend. 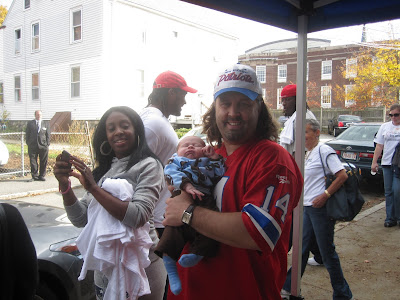 About that time, I noticed that the lady with the two kids in the stroller was headed to the parking lot across the street. She had managed to corner Vince Wilfork, the huge nose tackle, and he was signing an autograph for the kids. I decided to follow her. I approached Vince Wilfork as he was getting ready to get into his car. I asked him whether he would take a picture with and sign an autograph for my baby.

I was extremely impressed with Vince Wilfork. He was genuinely friendly and without hesitation took Isaac in his massive arms while my wife photographed us. (Only one month old, and my baby has already been held by a Super Bowl champion and a Pro Bowler. That's pretty cool. If I had a photo of myself being held by, say, Bob Lilly at the age of one month, I'd have it framed and hanging on my wall to this day.)

Vince Wilfork signed an autograph for my boy and could not possibly have been more cordial, especially given the fact that I had pretty much chased him down at his car. He's not especially tall for a football player, but his width is astonishing--and his forearms speak for themselves. Count me as a huge Vince Wilfork fan. I'll always be appreciative of the kindness he showed Isaac and me. Even though Ike obviously won't remember this experience, I hope that he'll treasure these photos for a lifetime. 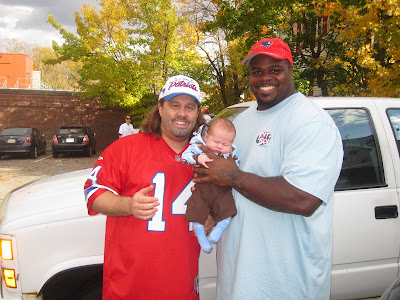 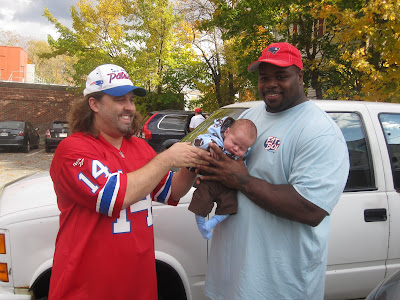 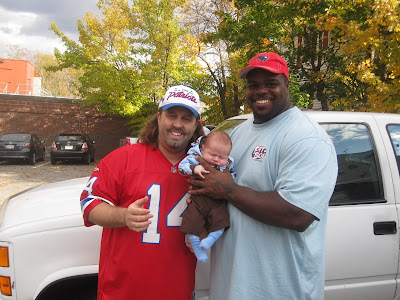 After Vince Wilfork left, the Brady watch was on. We were standing near the car he had gotten out of when he arrived, but a driver hopped into that car and pulled up right next to another exit from the building. Brady--after having participated quite animatedly with the kids in the Boys and Girls Club--was clearly not in the mood to be mobbed (again), and I can't say that I blame him.

The DJ from Providence and the lady with the kids in the stroller made something of a beeline for Brady, and he politely signed an autograph for the stroller lady, who rather nudged her way in front of the disgruntled DJ (who had, at least, introduced her kids to some of the other players as they entered the building earlier that day). With that, Brady was done, and he hopped in the passenger seat of his car as his driver slowly pulled away.

Again, and this is very important, Brady wasn't being a jerk. He had been there to entertain the kids at the club, which he very much did. I don't blame him for wanting to make a quiet exit; his presence on the street in Waltham had suddenly changed a small grouping of people into something of a bustling crowd. The waiting horde cheered for Brady has his car pulled away, which I thought was nice somehow. I did manage to snap a quick picture of him signing the autograph for the stroller lady. 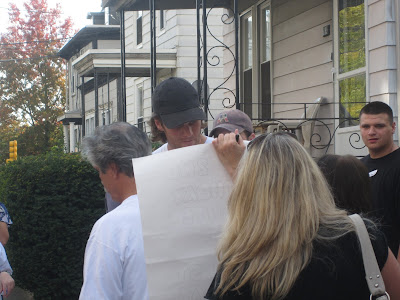 After Brady departed, the gathering on the sidewalk thinned considerably. Not long after Brady left, a man wearing a Boys and Girls Clubs volunteer shirt and walking a dog approached me. He asked how long Brady had stayed and I answered not long--but I did tell him that Vince Wilfork held my baby. He made a comment about how much larger Vince Wilfork was than a month-old baby, and we chuckled. He then talked about how cute Isaac was and moved on. Nice man, I thought...and he looked for all the world like Peter King.

In case you don't know, Peter King is the preeminent pro football writer in America today. He does live in the Boston area, but I hadn't heard that he would be at this event. Besides, this guy looked much younger and thinner than the Peter King I watch on TV. (Much younger and thinner--he's actually in very good shape and looks 10 years younger in person.) As you might imagine, I came to find out later on that the gentleman who spoke with me was indeed Peter King. Unfortunately, I didn't get a photo with him, but I did enjoy our brief chat. Seriously, if you ever want to meet celebrities outside and event, bring a baby. It works exceptionally well.

There weren't more than two or three people still waiting outside the building when a man exited to mild fanfare. I had no idea who he was, but I thought that he looked at bit like Mark Walhberg. There was a reason for that--it was Donnie Wahlberg, but I didn't know that until the guy with the football told me. I snapped a picture of him. A lady who was with him made goo-goo eyes over Isaac--seriously, bring a baby. Just find one and bring one. 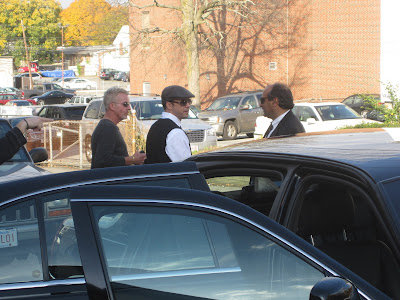 By that time, nobody was really outside the building except for a few volunteers who were still hanging around. I spoke for about 15 minutes to a volunteer named Paul, who was exceptionally friendly and very loyal to the cause of the Boys and Girls Clubs. He told me some funny stories about what had gone on inside during the playground construction--particularly about how Vince Wilfork had given Brady a hard time for being the last to arrive and one of the first to leave.

In all seriousness, though, the Boys and Girls Clubs is a great cause. I saw kids going in and out while I was there, interacting with each other and the staff. They all seemed very comfortable and happy. Paul told me about how he'd grown up going to the Clubs and wanted to give something back. It would be a great cause for donation if you're so inclined. I'll probably give a little something; Paul said that if everyone in Waltham gave just $1, that would add up to $60,000 for the Clubs and would be a nice little chunk of change for improvements to the facilities. That seems more than reasonable.

Just as my family and I were about to amble home, Paul let me know that there was one other famous person left in the building--Patriots owner Bob Kraft. Now, I have always liked Bob Kraft. Before he came into money, Kraft was an average Pats fan, a season-ticket holder at the old Foxborough Stadium who sat on the cold metal benches in the cheap seats with the other regular guys.

As Pats (and New England Revolution) owner, Kraft saved the NFL franchise from being moved to St. Louis by its previous owner and then turned down a huge public-financing offer to move to Hartford, instead spending his own money and building a whole new stadium in Foxboro.

Unlike Jerry Jones, the Arkansas scoundrel who owns the Cowboys, Kraft didn't use eminent domain to kick people out of their homes in order to build his private playground--nor did he use public money on the stadium the way Jones did down in Arlington. It's icing on the cake, really, that Kraft turned one of the worst franchises in NFL history into a winner and has thus far brought home five AFC championships and three Super Bowl titles to New England.

Accompanied by no entourage at all, only a driver, Kraft exited the building and waved. I approached him about taking a picture with Isaac, which he was more than happy to do. He stood for several photos, actually, and in his best politician moment, he leaned over at one point and kissed my baby on the head. He was an exceptionally nice man and even put his arm around me at one point while we were taking photos. Needless to say, I was very impressed with Bob Kraft. I'm a fan. 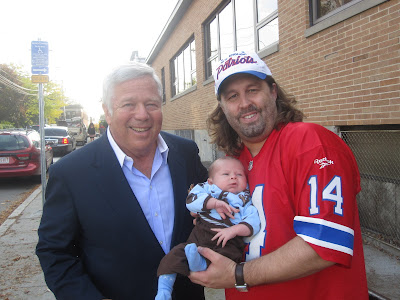 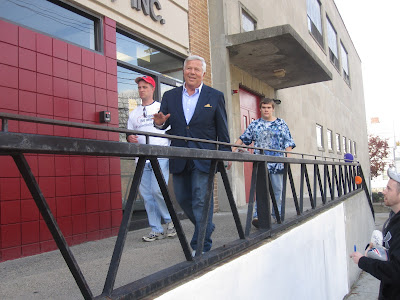 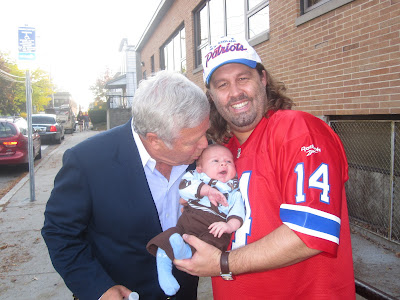 That, then, was how Isaac met Vince Wilfork and Bob Kraft and got to spend an hour or so stalking the Patriots. All three of us had a wonderful time and came away very impressed with the Boys and Girls Clubs (maybe Ike will play there when he's a little older) and with the Pats organization. Isaac's first brushes with greatness were a huge success.
Posted by Lee Pender at 1:56 AM