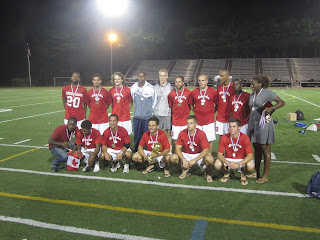 After a genuinely thrilling final, Canada earned the title of ONE Lowell World Cup champion in its first-ever OLWC tournament. I'll have more details on the tournament's final stages after I've slept a bit, but the order of finish was Canada, Brazil (the beaten finalist) and Colombia, which earned third place by beating Togo in a penalty shootout.

The final was an epic contest played in a tremendous atmosphere. Canada led 3-2 at halftime and hung on for the entire second half to take the victory by the same score. Colombia had the fans of the tournament, and the Colombia-Brazil semifinal had the feel of a real international knockout game, with fans stomping, singing, chanting and, yes, tooting on vuvuzelas.

There's a lot to talk about from this tournament, including the lady in the photo above...who was Canada's coach! But I'll save the details (and many more photos) for later. For now, it's time to congratulate the ONE Lowell staff on a job well done and get some rest.
Posted by Lee Pender at 12:21 AM