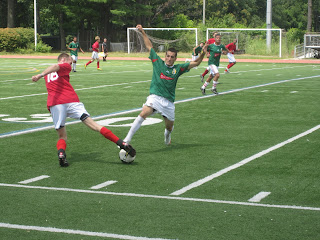 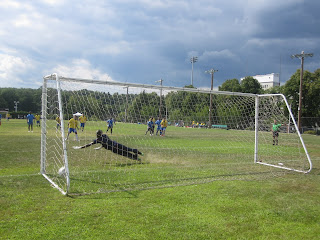 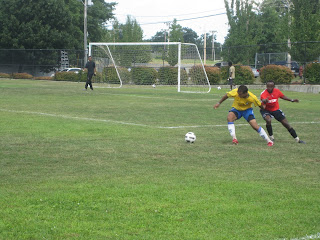 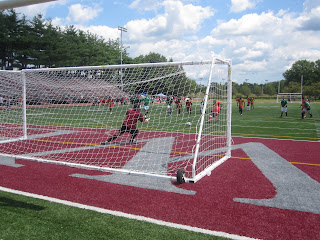 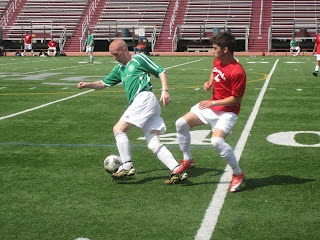 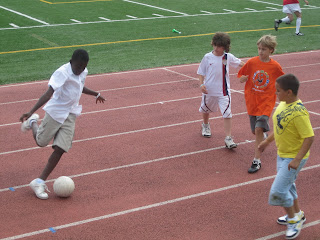 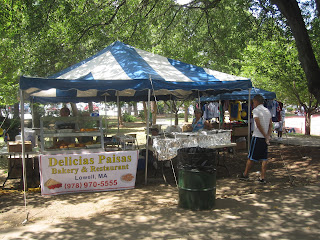 If you've been reading this blog at all lately, you realize that the ONE Lowell World Cup soccer tournament started last Sunday and will continue this weekend. Needless to say, the images you see above come from Sunday's action, which was fantastic. I could write more about the OLWC, but since I've already written a press release that I think is not too bad, I'm just going to post the release here and take the quick (and easy) way out. Do try to make it to Lowell this weekend, though. This is a fantastic event. Here's the PR:

On Sunday, August 1, more than 1200 people attended the ONE Lowell World Cup, a number almost as large as the attendance for the entire two-day event in 2007. Saturday also brought in almost as much money for the non-profit organization as last year’s two-day tournament did.

“We’re very pleased with the way the people of Lowell and the surrounding areas responded to the first day of the tournament,” said Victoria Fahlberg, director of ONE Lowell. “We saw on Saturday people’s desire to connect with each other and build a strong community here. The money raised will go to worthwhile causes, such as help for children who are having trouble in school. And the soccer on display was incredible—the best we’ve ever seen in the tournament.”

Teams participating in the tournament are made up of immigrants and recent descendants of immigrants from countries on five continents. The goal of the tournament is to bring together immigrants from diverse communities, along with native-born Americans, in order to foster better relations among people from different backgrounds. The tournament raises money for good causes, such as citizenship classes, school programs and assisting newcomers as they integrate into American life.

With some nations yet to play, a few standout teams emerged from Saturday’s first-round games. Canada impressed with wins over Jamaica and Ireland, and Guatemala also won two games, scoring 10 goals in the process. Brazil and Somalia, who finished first and third last season, respectively, played a thrilling match that finished in a draw. The US team impressed in its only performance of the day but lost to Colombia, 2-1.

Aside from captivating soccer, this weekend’s activities will include a penalty-kick shootout on Sunday at 3:00pm that is open to all kids ages 8 to 14, and a youth exhibition game featuring Brazil vs. the US on Sunday at 5:30pm.

The event is very affordable. Tickets for the ONE Lowell World Cup are $5 per day. Matches start at 9:00am on Saturday and at 8:00am on Sunday; the final will take place around 7:00pm on Sunday. Limited parking will be available for $2 per vehicle. For more information, go to http://www.onelowellsoccercup.org.

About ONE Lowell
ONE Lowell is a non-profit organization dedicated to increasing the integration and self sufficiency of Lowell's many immigrant newcomers. Proceeds from the ONE Lowell World Cup will go to help promote academic success among immigrant and refugee youth, provide citizenship services and leadership development, and promote self-sufficiency, justice and equality among all residents in the region.
Posted by Lee Pender at 12:41 AM

Email ThisBlogThis!Share to TwitterShare to FacebookShare to Pinterest
Labels: football, New England, photography, soccer, sports, this could be the start of something big, what the rest of the world calls football