The Party's Over, But the Fun Is Just Beginning 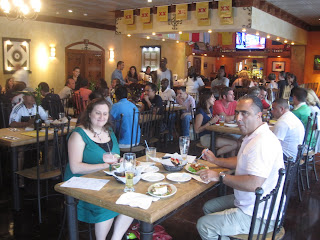 The hospitable Garcia Brogan's in Lowell was home to the ONE Lowell World Cup draw party Sunday night. Twenty teams from five continents will compete for the coveted World Cup trophy on August 1, 7 and 8 at Cawley Stadium. Proceeds go to ONE Lowell, which does a lot of good work helping children of immigrants and refugees (among other folks) in Lowell.

As for the draw itself, it produced a fair amount of excitement and some pretty good match-ups. Check out the board: 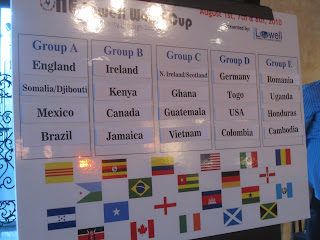 That Group A is going to be a killer, given that the Brazilians won last year and the Somalis finished third. Mexico didn't field a team last year but will no doubt be strong, and England...well, the English will look dapper in their all-white kits. The most animated group by far at the party hailed from Togo, which also did not have a team last year. How good the Togolese will be, I don't know--but they should be fun to watch, in any case.

Thanks, by the way, to Lisa from the Examiner Web site for posting a great article about the tournament. Also, we managed to crack the Boston Globe and the Herald via the AP. Hooray! Roll on, August 1.
Posted by Lee Pender at 12:56 AM

Email ThisBlogThis!Share to TwitterShare to FacebookShare to Pinterest
Labels: football, New England, soccer, sports, summer, what the rest of the world calls football