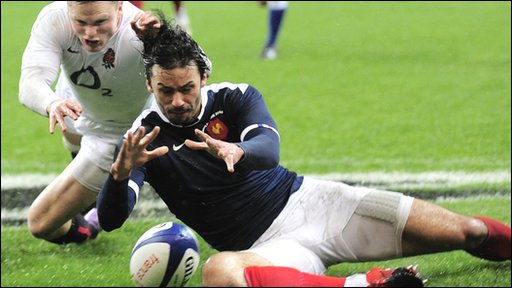 It was just perfect. I loved everything about it. The rain, the mud, the slow pace, the lack of scoring. Today's France-England rugby match, better known (as it is every year) as "le Crunch," had everything an ex-tighthead prop like me wanted to see. It was a match I would have loved to have played in...in theory (and fantasy), anyway.

Oh, sure, the French are freaking out about it. Never mind that their national team won the 6 Nations Grand Slam--or Grand Chelem in French--for the first time since 2004 (when I watched on TV in my apartment in Paris as France beat England for the Slam). Never mind that it had been a while since the French could put two victories in a row together over anybody, and they just rattled off five in the last few weeks (over the opponents they face in the 6 Nations tournament every year, of course: Scotland, Ireland, Wales, Italy and England).

The French love running rugby, or "French flair" as even they call it. They love spectacular tries that start from inside the five-meter line and go blazing down the pitch with fluid passing and slippery runs. They love drama, beauty and suspense. They generally don't love the kicking game (any facet of it--penalties, drop-goals, tactical kicks, whatever...), and while they do embrace physical play, their teams are not usually as strong as those of the English, who remain--for reasons of climate, most likely--the best mudders in the world.

And that's why France has lost so many big matches to England over the years. In the last two World Cup semi-finals, the English scrapped, rucked and kicked their way to victories over the French, who had come into both matches with a huge head of steam. The English have always been about fundamentals--making drop goals, kicking penalties, winning set pieces. Their best sides have also shown some beauty and drama, but mainly they prefer the stiff-upper-lip, get-the-job-done approach to rugby. It's why they've won a World Cup and the French haven't. (That little fact still drives me nuts, by the way, but I digress.)

Today, though, everything was different. Everything was reversed. Rain drenched the Stade de France in the first half. The French used a strategy of ball control and tactical kicking, successfully suppressing the desire to try to put every ball they touched over the try line. Morgan Parra nailed three penalties and only missed one, which pretty much counts as a perfect day by French kicking standards. Moreover, France absolutely dominated the English scrum, particularly in the first half. Nicolas Mas, France's spark plug of a tighthead (yeah!), just devoured his opposite number in the first 40 minutes. France dominated the match physically--less so in the second half but enough to hold on for the win.

What was most amazing about this match was that France, which had mostly rolled over its first four opponents by rolling up the points, beat England without scoring a try. Again, that's the opposite of what's normal. Generally, England beats France (when England wins--which, of course, isn't always the case) with penalties and drop goals, while the French score glorious tries in losing efforts. Even in the 2003 World Cup semi-final, all of England's 24 points came off of someone's foot--most (maybe all--I don't remember) off of the toe of Jonny Wilkinson, who has so tormented the French over the years that his name might as well be Nelson or Wellington. France's seven points in that match came from a diving Serge Betsen try. And that was that.

Even today, the aging Wilkinson came on as a substitute in the second half and put a huge amount of pressure on the French, kicking an astonishingly long penalty to make a 12-7 game 12-10 in the dying minutes. But the brave French--who were actually huge favorites to win the match, although odds and such matter nothing in a rivalry as intense as this one--out-mudded the mudders. They were more English than the English, who, for their part, played the typically French role of turning the ball over too often and committing too many costly penalties. And the reward for l'equipe de France was not just another 6 Nations tournament victory--their fifth in nine years--but a Grand Slam in the 6 (which used to be 5) Nations tournament's 100th-anniversary season.

Watching the game today (thanks, BBC America) reminded me of how much I love the 6 Nations and how much I used to love it when I lived in Paris. (I also deeply love French rugby, although I don't talk about it much because not many people in this part of the world know or care much about it. I could get started with the names of great players I remember and go on for hours...but I won't. Not now, anyway.) I actually got to go to a 6 Nations match--France v Italy in 2002--in a year in in which France won the Grand Slam. But even without tickets, everybody in Paris could enjoy the atmosphere on tournament match days--particularly when the English where in town. (The Irish were also a lot of fun, for that matter.) The pubs were electric. Heck, the whole city was even more electric than usual.

The ribbing was always good-natured, and there were always beers after matches with friends and foes alike, regardless of the score. Rugby spirit is one of the greatest things in the world. I don't know how 80 minutes of utter violence and brutality leads to hours of drinking among both opposing players and opposing fans, but it does. Sure, everybody takes the game seriously, but there's no such thing as a rugby hooligan--not off the pitch, anyway. Rugby is a family and a close one at that.

I do miss my 6 Nations days out at the pub, but watching France beat England in rugby always puts a smile on my face, even though I'm watching in Waltham now and not in the 17th arrondissement. And today's match, with its blood-and-guts play, made the ex-prop in me especially happy. I really believe that my rugby days as a player are over. The sport is fun but awfully brutal, and I don't have the time to commit to a club that I had when I lived in Europe. (Plus, I want to spend my time in other ways now.) But I'll always be a fan of French rugby and a fan of down-and-dirty rugby. Today, the two came together in a rare moment, and I couldn't have enjoyed it more. Merci, les Bleus, for what has already become another great memory.
Posted by Lee Pender at 10:53 PM