Sometimes a Beard Is Just a Beard 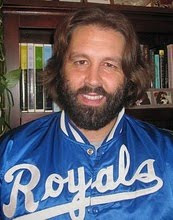 So, I was all ready to write a post about how I got my hair cut on Saturday, and how I hadn't had a serious haircut for at least a couple of years before this past weekend, and how I absolutely love getting my hair cut (oddly enough), which I do.

But when I put up a new profile picture on the sites I use regularly (including this site), nobody said much about the hair. What got all the attention was the beard. Now, I've been wearing a beard for a while now, since December or so. And I've grown to like the way it looks and feels. The honest truth is that I just got tired of shaving and decided to let the whiskers grow. That's all there is to it--nothing else.

It has prompted a completely unexpected response, though. I know that heavy beards aren't too popular anymore, generally speaking, but I didn't think that the look was shocking or anything. Some friends have reacted as though I got a mullet and a rebel-flag tattoo or something. To be fair, though, other friends have liked the face pelt and have told me so. One friend said that I look like Barry Gibb--which I consider a compliment. Another person told me that I could do those GEICO caveman commercials now. Hey, for a little extra income...

My favorite reaction thus far, though, has come from a good friend in England, who said that he was going to start calling me Socrates--not after the Greek philosopher, but after the much more influential Socrates, the legendary Brazilian footballer:

I would consider that moniker to be a great honor, just as I did when a random guy at a Brazil-Venezuela football match at Gillette Stadium a few years ago saw my (now-departed) ponytail and said I that looked like a fat Gabriel Batistuta. Here's the real, skinny Gabriel:

Having always been a little bit more Argentina than Brazil in my South American football leanings, I was especially proud of any comparison between me and Batistuta, regardless of the (accurate) observation of portliness that went with it.

But if not having to shave and not having hair constantly in my face means being more Socrates (or even Barry Gibb) than Batistuta, I can live with that. In the final analysis, though, my beard and my hair are just, well, hair. They're not political statements or hints of rebellion or signs of personal transformation or anything else. They're just the hair on my face and head. And, yes, fortunately there is a lot of it.
Posted by Lee Pender at 12:16 AM

Email ThisBlogThis!Share to TwitterShare to FacebookShare to Pinterest
Labels: football, random photo, soccer, sports, this could be the start of something big, what the rest of the world calls football