BC 3, New Hampshire 2: A Bittersweet Finale 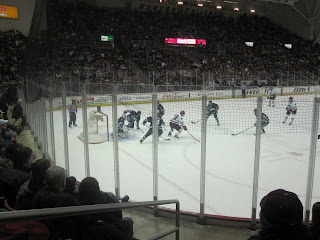 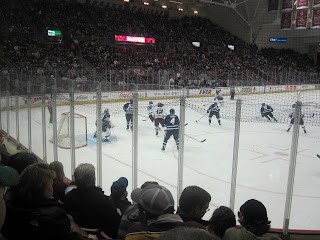 At some point on Friday night, BC led New Hampshire 3-0 up in Durham. Had BC hung onto that lead, tonight's game would have been a battle for the Hockey East Association regular-season championship. Alas, BC blew the lead, settled for a 3-3 tie...and lost the regular-season title to UNH in the process.

So, I wasn't quite sure how tonight's rematch--an essentially meaningless game--would shake out. Would it be a walk-through for both sides, given that the top two HEA Tournament places were set in stone? Would it be a walkover for BC on Senior Night with a complacent UNH coming into town? Or would it be a raucous revenge game in which UNH would try to confirm its supremacy and BC would seek to send a message heading into the conference tournament?

Fortunately for the very large crowd at Conte Forum, tonight's game was of the raucous-revenge sort, and it was a rollicking way to end BC's regular season. A back-and-forth battle, it featured something my buddy and I rarely see at BC games--lead changes. (BC tends to win big at home.) It also featured some great hockey at pretty much every position on the ice on both sides--especially from UNH's goaltender, who stopped 39 shots, many of which were excellent scoring chances.

Unfortunately for UNH's man between the pipes, he allowed the first goal of Brian Dumoulin's BC career with about three seconds remaining in the second period. The goal tied the game at 2-2 and completely turned the momentum of the contest, which UNH had grabbed earlier in period two by taking a 2-1 lead. BC scored again early in the third to take the lead for good and held off the Wildcats, who managed only 18 shots (in comparison to BC's astonishing 42) but were every bit in the game for 60 full minutes of play.

And so BC concluded its regular season just one point shy of UNH in the Hockey East standings, but the Eagles will go into what could be a tough best-of-three, first-round HEA Tournament match-up with UMass next weekend with a little momentum. And UNH, which, unlike rivals BC, Boston University and Maine, has never won a national championship, begins again what has always in years past been a futile quest for college hockey's top prize.

For me, however, the season is over. Oh, sure, I'll follow BC on TV through the HEA and (in all likelihood) the NCAA Tournaments, and I'll be an Eagles fan all the way. But I've been to my last game of the season at Conte Forum, and I have to admit that I'll miss live college hockey. It gets me through the winter, sure, but I've also come to be a real fan of the college game and of BC hockey in particular. There's nothing better than kicking back on a weekend night--Fridays are the best--and letting the stress of work and life melt away (or freeze?) onto a sheet of ice in Chestnut Hill, Mass. The tickets are inexpensive; the games are entertaining, and the atmosphere in Conte is actually pretty darn good. Plus, it's close to home. I plan to be back for at least a few games next winter.

For now, though, the real test begins for BC's hockey team--and the wait for spring begins for me. Today's 55-degree high and brilliant sunshine gave Bostonians a glimmer of hope that spring might be around the corner, but March can be a nasty month and April rarely lives up to expectations. Still, I've managed once again to pass through the dark heart of winter here, and I know that spring will exist at some point in the weeks to come. So, I don't really need BC hockey anymore now that the worst of winter is behind me. Spring in New England is lovely, and summer here is just plain idyllic. Still, I look forward to getting back to Conte again in December or maybe January. Looking forward to winter--now, that is strange.

Anyway, to the BC Eagles, I say congratulations on a very good season and bon courage in the tournament(s), and I'll be back to see you when the days turn dark and cold again. Thanks for the good times. (Oh, and as usual--when I remember to bring my camera--the unedited photo set is online.) 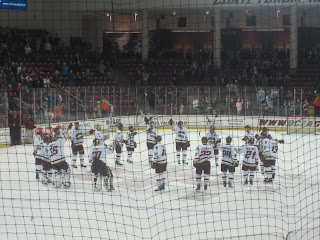