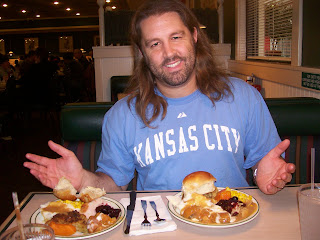 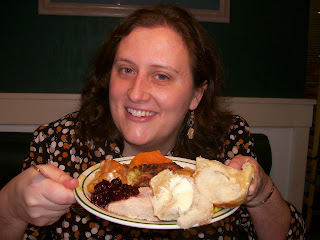 It doesn't matter why or how, but this year's family Thanksgiving just kind of fell through. So, after taking in the increasingly mediocre Macy's Thanksgiving Day Parade on TV--seriously, why does it have to stop every two minutes for some lame song?--my lovely wife and I finally decided to have Thanksgiving dinner at that great American institution, the Old Country Buffet.

That turned out to be a superb decision. For $12 each, we feasted on an unlimited buffet of traditional Thanksgiving fare as well as on a wide range of desserts (and I do mean a wide range--I ate five, and I am now something of a "wide range" myself). There was turkey (of course), along with roast beef, candied yams (more or less sweet potatoes with melted marshmallows, in case some of you aren't familiar with yams), mashed potatoes with gravy, cornbread stuffing (absolutely amazing), soft rolls with real butter, corn, and all sorts of green vegetables--but I don't remember having any of those.

The crowd was interesting, too. First, there was a crowd; the place was packed around 1 pm. Granted, we hated that anybody had to work on Thanksgiving, but the staff was friendly and didn't seem to mind too much being there, for what it's worth. (I suppose nobody really minds having a job right now.) Anyway, the folks populating the OCB represented just about every segment of American society--except, maybe, the super-rich, but who really sees them, anyway?

Everybody else was there--people of all sorts of ethnic backgrounds and origins; folks from a pretty wide spectrum of social classes, from what we could tell (although it is hard to judge such things on appearances); big families going all out and celebrating Thanksgiving dinner; couples like us just out for a massive holiday meal; old folks; kids; people of girth; skinny folks (although the larger folks won the day, it must be said--no surprise at a buffet that doesn't exactly specialize in organic bean sprouts)...pretty much any kind of American I could imagine, save maybe those with names like Gates or Trump. And if Bill and Donald weren't there, they don't know what they were missing.

The rest of the day just kind of floated by. There was a nap, perhaps fairly long--who was keeping track? There were phone chats with parents and friends, although, sadly, there was no face-to-face contact with family due to illness (FYI, we're not the ones who are sick--and we certainly hope everybody gets better soon) and other circumstances. That was a bit of a downer, Thanksgiving being a family holiday and all...but my lovely bride and I made our own memories with our OCB experience, which was a holiday treat in its own way. And then, of course, there was Dallas 24, Oakland 7--a nice, secure Thanksgiving victory for the old hometown 'Boys on the day when I love watching them play most.

Tomorrow, I suppose, the Christmas season begins (although my wife insists that it begins on Dec. 25--something about Advent or what not). With Christmas comes gift stress, incomprehensible traffic jams near my office (and the shopping areas near it) in Framingham, and general holiday fatigue. (Christmas does, though, bring a month of listening to the Kinks' masterpiece, Father Christmas, so that part is good.) Of course, we will celebrate the birth of Christ, which really is the reason Christians bother with Christmas in the first place. It can be hard, of course, to tune out the constant distractions of advertising and gift-buying and focus on God's gift to us. I'll do the best I can to do that this year...although I know that commercial Christmas will find a few ways to annoy me somehow.

For today, though, there is (or was--it's past 10pm now) Thanksgiving, my favorite holiday. The most American of holidays, we celebrated it in the most American of ways--by stuffing ourselves at an all-you-can-eat buffet. And it was fantastic. We were patriots today, great American heroes, preservers of the culture and evangelists for our American way of life. I say this without a hint of irony: God bless America, and a happy Thanksgiving to all.
Posted by Lee Pender at 9:11 PM